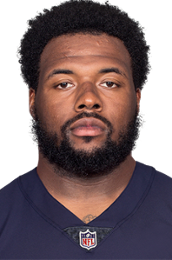 Has played in 85 games with 30 starts for the Titans, Texans and Cardinals; enters his eighth NFL season with the Bears in 2021
Selected by the Titans in the fourth round (100th overall) of the 2015 NFL Draft

Appeared in all 16 games (nine starts) and matched career highs with 24 tackles and 2.5 sacks also had career highs with three tackles for loss and eight QB hits
Recorded two tackles, a sack, a tackle for loss and two QB hits for a defense that held the 49ers to just two conversions on 11 third down attempts (18%) in the season-opener at SF (9/13)
Started and registered a career-high five tackles vs. Buf (11/15)
Started and had three tackles, a tackle for loss, 1.0 sack and a QB hit on Thursday Night Football at Sea (11/19); sacked Russell Wilson for a six-yard loss on the first play from scrimmage
Registered two QB hits and four tackles, including a fourth down goal-line tackle for loss in the start vs. LAR (12/6)

Played 15 games (all starts) and totaled 20 tackles, two tackles loss, one QB hit and two blocked FG attempts
Started both postseason contests and had four tackles
Had two total tackles and blocked a 45-yard field goal attempt in the first quarter at Ten (12/15); named AFC Special Teams Player of the Week for his performance
Logged a season-high four total tackles and blocked a 54-yard field goal attempt at TB (12/21), becoming the first NFL player to block a field goal in back-to-back weeks since Olivier Vernon in Weeks 8-9 of 2012; joined J.J. Watt (two in 2013) as the only players in Texans history to block multiple field goals in a single season
Had three tackles in Wild Card game vs. Buf (1/4/20) and posted one solo tackle in the Divisional Round at KC (1/12/20)

Played 13 games (one start) and had nine total tackles and one pass defensed
Saw action as a reserve vs. Jax (10/27), notching two tackles and a pass defensed
Made his first career start and tallied three tackles at Ind (11/20)