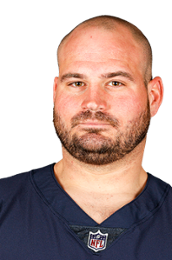 Finished his fifth NFL season in 2020; has started 78 games (60 at C, 16 at LG, 2 at RG) for the Bears; also has two postseason starts
Had a streak of 71 consecutive games with a start snapped in Week 8 vs. NO
Paved the way for rookie Jordan Howard to 1,313 rushing yards (2nd in NFL) and also help Howard become the first Chicago Bear to rush for 1,000+ yards in his first two seasons as a Bear

Played and started in 14 of 16 games; had started every game at center before an injury in Week 7; inactive for Weeks 8 & 9 with calf injury; returned Week 10 vs. MIN
Helped the Bears rush for 149 yards in the Week 1 win at Detroit, 135 in Week 2 vs. NYG and 130 in Week 3 vs. ATL
Helped pave the way for David Montgomery to rush for 103 yards in Week 12 at Green Bay
Helped the Bears rush for 140 vs. the Lions in Week 13, including three rushing scores, and 169 yards on the ground in the Week 14 win over the Texans
Helped pave the way for the Bears to rush for a season-high 199 yards and two rushing scores in the Week 15 win at Minnesota

Started 16 games, the first eight at left guard before finishing the season at center for the final eight

Named to his first Pro Bowl
Started 16 games at center; part of an offensive line that allowed just 33 sacks, tied for the third fewest in the NFC
Started Wild Card playoff game vs. PHI (1/6/19)

Started 16 games; played three different positions on the offensive line: 12 at C, 2 at LG, 2 at RG
Help Jordan Howard become the first Chicago Bear to rush for 1,000+ yards in his first two seasons as a Bear

Started all 16 games as a rookie for the Chicago Bears and paved the way for rookie Jordan Howard to rush for 1,313 yards (2nd in NFL)
Helped the Bears to the third most passing yards (gross and net) in franchise history