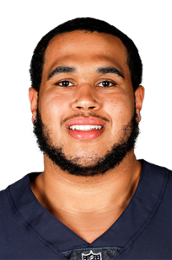 A 6-5, 332-pounder, Borom started 19 of 20 games his final two seasons for the Tigers. A 2020 All-SEC Second Team selection, he started all eight games in which he played in 2020 at right tackle, helping the Tigers rush for 135.2 yards per game and 21 touchdowns in 2020. Borom also had the lowest QB pressure percentage (0%) last season among FBS offensive tackles according to Pro Football Focus.