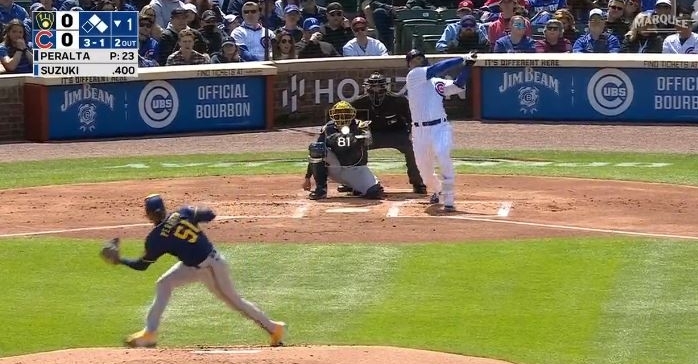 Suzuki got his first MLB homer on Sunday against the Brewers

New Chicago Cubs right fielder Seiya Suzuki crushed a three-run home run to left center off of starter Freddy Peralta to put the Cubs up 3-0 in the first inning against the Brewers on Sunday.

The home run was his first big league dinger and it traveled an impressive 412 feet with an exit velocity of 111 MPH.

The National League Central should be very concerned if Suzuki can have an MVP or Rookie of the Year type season for the Northsiders.

In his first 10 plate appearances through three regular-season games, he has three hits including a homer, three walks, and six RBIs.

During spring training, Suzuki had two long home runs to show off his tremendous power that is certainly translating from pro baseball in Japan.

His first @MLB home run has not. pic.twitter.com/J1JxctAWj0

Field level view of the homer:

View from the dugout celebration:

The celebratory bow around third base: