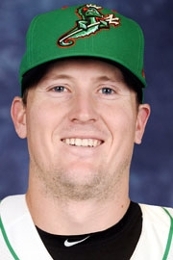 Pitcher
B I O
Selected by the San Francisco Giants in the ninth round of the 2013 MLB Draft out of Minnesota... full name is Donald Snelton... is fastball sits in the low 90s, and he regularly touches 94 mph... in 10 appearances (eight starts) in 2013 with Minnesota, Snelten went 5-2 with a 2.18 ERA; he struck out 42 and walked 19 in 58 2/3 innings pitched to form a powerful duo atop the Gophers' rotation with Tom Windle, who was drafted by the Dodgers... Snelten missed the first month of the 2013 college season with an elbow injury... graduated from Lakes Community High School in Illinois, where he was coached by William Rosecrans... was previously drafted by the San Diego Padres in the 30th round of the 2010 Draft but did not sign... named Honorable-Mention All-State in his senior season and was All-Conference in 2009 and 2010... lettered in golf at high school and played club ball with the Kenosha Indians from 2007-10... son of Don Snelten and Sandy Kappelman... pitched a no-hitter with 13 strikeouts in seven innings in high school... made his Minor League debut on June 28, 2013 with the AZL Giants.