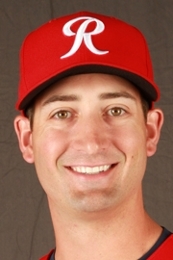 Pitcher
B I O
Acquired by the San Diego Padres with pitcher Robbie Erlin from the Texas Rangers for pitcher Mike Adams on July 31, 2011. ... Named the Padres' No. 8 prospect by MLB.com entering the 2012 season. ... Pitched a nine-inning no-hitter on July 29, 2011 in his final start in the Rangers organization. ... Selected by the Rangers in the fourth round of the 2008 First-Year Player Draft out of Bishop Manogue (Nev.) High School. ... On the mound, went 7-2 with a 2.04 ERA, 115 strikeouts and 15 walks over 72.0 innings at Bishop Manogue. Also batted .556 with 12 homers and a state-record 76 RBIs, which, according to some reports, led the nation in 2008. ... Was named Nevada State Player of the Year by the Las Vegas Review Journal and the Reno Gazette Journal. ... Originally signed a letter of intent with San Diego State University.