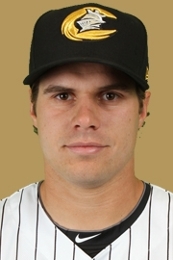 Catcher
B I O
In 2014, ranked second in the White Sox farm system in home runs and extra base hits, third in slugging, fourth in total bases, sixth in runs and RBI and ninth in doubles, and ranked second in the International League in extra base hits, third in home runs and slugging percentage (.530). ... Acquired by the Oakland Athletics with pitcher Chris Bassitt and infielders Rangel Ravelo and Marcus Semien from the Chicago White Sox for pitchers Jeff Samardzija and Michael Ynoa on Dec. 9, 2014. ... In 2013, became the first player in Sox history to hit a grand slam within his first five career games and record eight RBI in his first five games. ... In 2010, was limited to just 48 games due to Idiopathic Thrombocytopenic Purpura (ITP), a rare autoimmune disorder that lowers platelet count. ... Selected by the Chicago White Sox in the first round (38th overall) of the 2009 First-Year Player Draft.