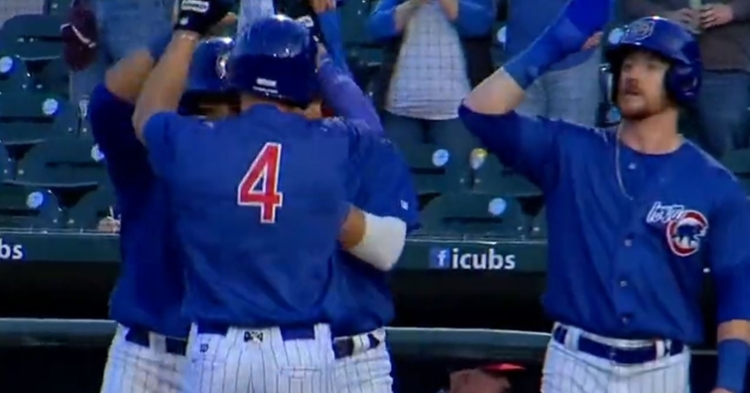 Dewees with a grand slam in the win

It wasn't a perfect night on the diamond, but close as the Cubs minor league system went 3-1 on Tuesday night. Couple that with the Cubs win over the Pirates, and it was a great day on the diamond for the entire Cubs organization.

Looking at the system as a whole, there is a lot we still don't know about the system apart from the Tennessee Smokies, who look like the best team this season. There are still plenty of games left for other teams to pick it up, but for right now, Tennessee appears to be the class of the system.

Although they had a rough first series to open the season, Iowa was competitive in all but one game. Heading home for the first time this season, the Iowa Cubs used the home crowd to fuel their 8-5 win.

Robert Gellman made the start and gave the Cubs not only three scoreless innings, but three hitless innings to go with three strikeouts. Looking at how shaky his spring was, this has to be considered a win for him. Following his outing, Connor Menez was the first out of the pen as he immediately went on to allow the go-ahead run.

That run came in the fourth on a Kody Clemens RBI single as the Cubs trailed 1-0. The lead was short-lived, with the Cubs erupting for a massive seven-run bottom of the fourth to take the lead. While Brennen Davis and Greg Deichmann picked up RBI singles, the Donnie Dewees grand slam was the big hit, with the Cubs leading 7-1.

Your @EMCInsurance Player of the Game is Donnie Dewees with this grand slam to give us a lead! pic.twitter.com/j0xST2UBpx

John Hicks had a sacrifice fly mixed in with all that as the Cubs seized control.

Deichmann would add an RBI double in the sixth to give the Cubs an 8-1 lead before Toledo would start to rally late. Now trailing 8-2 after the Zack Short RBI double in the eighth, Toledo brought home a trio of ninth innings, with two of them coming off the Jacob Robson homer to pull within 8-5. That would be as close as they would get as Manny Rodriguez ended the game with a punchout.

A GRAND start to our home season! pic.twitter.com/BOuawkurYJ

It is not how you start but how you finish. However, in this game, it was how you started with the Smokies pushing across four runs in the first two innings and holding on for the win. Javier Assad took the ball for his first start as he continued the trend of strong pitching performances. Assad allowed one run in 3 2/3 innings of work while striking out four.

He opposed Michael Mercado as the Smokies hit Mercado hard and gave Assad plenty of run support early. With a pair of runners on base in the first, Chase Strumpf busted things wide open as his three-run shot put the Smokies in front 3-0.

Be a Smokie, hit smoked homers:

Chase Strumpf, the @Cubs' No. 26 prospect, puts the @smokiesbaseball on the board with a 3-run blast. pic.twitter.com/8DGiTE5FRR

One inning later saw Yonathan Perlaza crank his first career AA homer as it proved to be the winning run with the Smokies up 4-0.

Things got off to a slow start offensively for Montgomery with the second inning Evan Edwards RBI single as the lone offense much of the game. That was until the sixth, when Kameron Misner led the inning off with a solo shot before the Edwards sacrifice pulled the Biscuits within 4-3.

That would be as close as it would get with Dauris Valdez giving the Smokies a pair of perfect innings with Brandon Hughes striking out the side in the ninth to secure the 4-3 win. Darius Hill and Nelson Maldonado collected a pair of hits in the win.

Like the Smokies, the Cubs got off to a hot start, but then struggled the rest. For good the rotation was supposed to be, South Bend hasn't been sharp, which was again the case on Tuesday.

Daniel Palencia took the ball and was shaky, but still strong. Despite walking four batters in 2 2/3 innings of work, Palencia added four punchouts to go with one run allowed as his future looks bright. With Noel Vela opposing him on the other side, South Bend erupted for a massive first inning as they put a crooked number up in the first.

The Cubs had the bases loaded on the strength of an error and a walk, but with two outs. Matt Mervis made sure the offense wouldn't come away empty-handed and ripped the bases-clearing double to give South Bend a 3-0 lead. Little did the Cubs know that would be all the offense they would get.

Palencia allowed the lone run in the second inning when Corey Rosier ripped an RBI triple to make things 3-1. Shortly after, that signaled a call to the bullpen with Manuel Espinoza summoned. Espinoza didn't have the outing he hoped for, allowing four runs in three innings to be saddled with the loss.

The first of those runs came in the fourth and fifth innings as Jack Stronach, and Justin Lopez picked up RBI doubles to tie things up 3-3. In the sixth, Espinoza allowed the eventually winning hit as Robert Hassell III connected for the two-run shot to make things 5-3, which is how things would end up.

For the first time this season, the Cubs organization delivered a walk-off win, with the Pelicans being the recipient of that award. Not a bad way to kick off the home slate.

Porter Hodge made his season debut and gave the Pelicans four impressive innings by allowing only two hits with six punchouts. He gave way to Luis Rodriguez, Jake Reindl, and Sheldon Reed, who combined to toss six innings of one-hit ball with 12 strikeouts. In total, Pelicans pitching struck out 20 hitters in a dominating performance.

For Augusta, pitching was also the strong point as they struck out 14 hitters. Landon Leach started with seven strikeouts across five innings of work before the bullpen took over. In fact, neither team scored a run through nine innings as extra innings were needed for this game.

With the game still sitting at 0-0 in the 12th, Adam Zebrowski came through with a double to break the scoreless tie to give Augusta the 1-0 lead. Moving to the bottom of the 12th, Yeison Santana picked up a double of his own to pull the Pelicans back to even. Following a Pete Crow-Armstrong single to put runners on the corners, Kevin Alcantara played hero as his walk-off single lifted the Pelicans to the 2-1 win in front of the home crowd.

How about THAT for a home opener?!

Birds win in 12 with a Kevin Alcantara walk-off single.#MiLBOpeningNight pic.twitter.com/GTMB2YdBOx