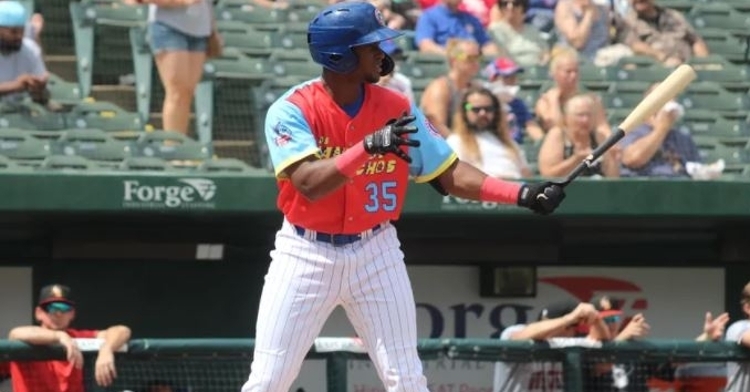 Canario had a RBI double in the win

Things were much quieter on the diamond Sunday as only two of the four Minor League teams were in action. With both Tennessee and Iowa seeing their games postponed, the focus shifted to A-Ball, where South Bend and Myrtle Beach took center stage.

You would like to see better than .500 results, but that was precisely the case with the Cubs going 1-1 on the afternoon ending the first full week of minor league ball on a positive note.

Although the Cubs haven't gotten off to the start they would have liked at just 3-6, there is a ton of fight in this group. Holding a 3-0 lead most of the day, the Cubs saw their lead slip away as Fort Wayne pushed four runs across in the bottom of the eighth to secure the win.

Daniel Palencia made his second start of the season and battled through some major command issues. The top 30 prospect gave the Cubs three innings of one-hit ball, but walked four to go with five strikeouts. He turned things over to Manuel Espinoza, who gave the Cubs four innings out of the pen with one hit allowed.

Bailey Reid continued the trend of one-hit allowed as the Cubs pitchers allowed just three hits in the game. Unfortunately, Reid walked three hitters in that eighth inning and was charged with all four runs to take the loss. Opposing Palencia was Noel Vela, who was very good in his 3 2/3 innings of work. Vela allowed a pair of hits before the bullpen started to get knocked around.

Neither team got anything going through four innings, but the Cubs got on the board first in the fifth. With a pair of runners on, the suddenly scorching hot Alexander Canario connected for his fourth double of the season bringing home two as the Cubs led 2-0.

The Cubs would add to that lead in the seventh off the Fabian Pertuz single as they took the 3-0 lead into the eighth. Still holding that lead in the eighth and with Reid on the mound, South Bend began to panic as four batters into the inning saw Reid walk the bases loaded.

The Justin Lopez grand slam followed that to put the Tin Caps in front 4-3. Reid recovered from there, but the damage was already done with the Cubs going down in order to end the game. Bradlee Beesley and Yohendrick Pinango led the way with two hits, while four others grabbed one. South Bend had their chances to win this game, leaving 24 runners on base.

The first home series is in the books for Myrtle Beach, and it couldn't have gone much better. Not only did they treat the fans to plenty of walk-off moments, but they finished the weekend with a 6-3 win to improve to 5-4 on the year.

Behind Porter Hodge, who allowed three runs in just over three innings of work, the Pelicans offense was charged up, pushing across five runs in the first four innings to provide all the offense they would need. Hodge turned things over to the bullpen trio of Luis Rodriguez, Adam Laskey, and Bailey Reed as they allowed three hits to keep the Greenjackets off the board. Reed secured the save, striking out four hitters in 1 1/3.

Hodge was good, but not great and found himself putting his team down early. Stephen Paolini picked up an RBI single in the first to put Augusta up 1-0. That was one of their two leads in the game for the Greenjackets as Myrtle Beach battled right back.

Anchored by an error that allowed Peter Matt to reach on a fielder's choice, the Pelicans took a 2-1 lead in the second, with Ethan Hearn bringing in the go-ahead run via groundout. Much like when the Pelicans grabbed the lead for the first time, their lead was short-lived as another Paolini RBI single tied things up ahead of the Brandon Mezquita sacrifice fly, putting the Greenjackets back on top 3-2.

Once again, it was another short-lived lead as the Pelicans took the lead for good in the bottom half of the fifth. What started with a double steal that saw Pete Crow-Armstrong steal home to tie the game, Jacob Wetzel put the Pelicans in front for good with an RBI groundout. Matt would add an RBI knock later as Myrtle Beach was up 5-3.

The Pelicans pushed across the game's final run in the fifth inning as a costly error allowed Hearn to reach and pushed the lead to 6-3. Myrtle Beach would win by that score as their bullpen was lights out. The Pelicans had just six hits in the game, with Kevin Made leading the way with two. Wetzel, Matt, Kevin Alcantara, and Yeison Santana grabbed the other four as the Pelicans are still trying to figure out who they are as a team.

We’ll be in the road to take on @shorebirds next week!#MBPelicans pic.twitter.com/XUckzEqi1h