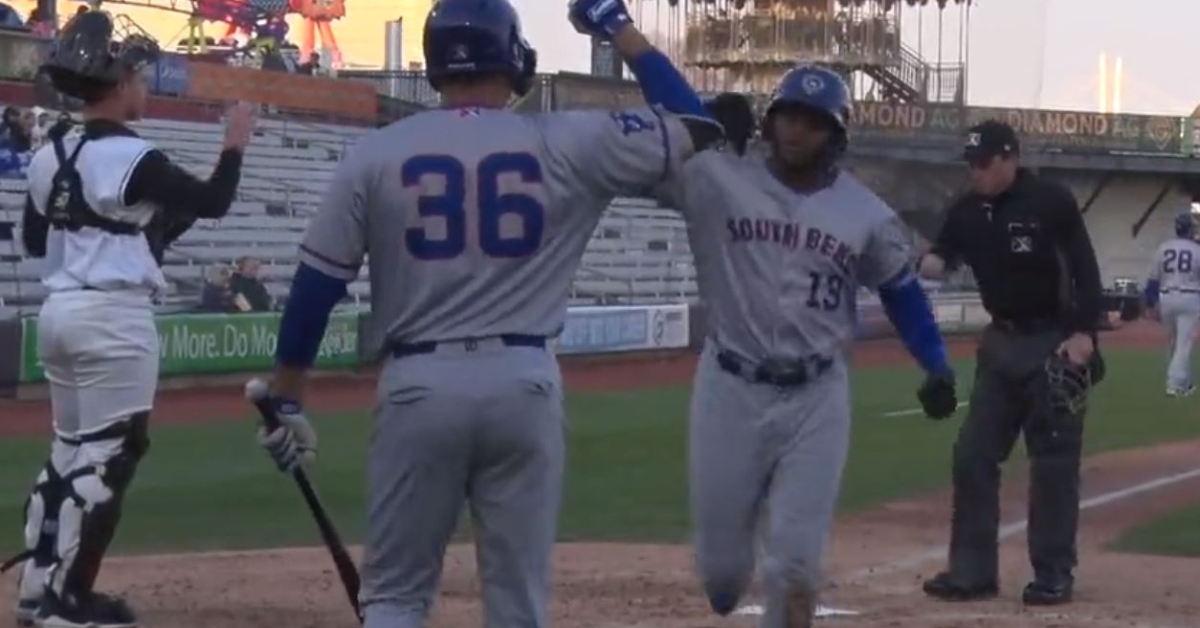 Canario had two homers in the South Bend win

While the Cubs offense may be struggling right now, that has not been the case at the minor league level, with the organization scoring a plethora of runs. Even with one team nearly getting no-hit and another team getting postponed, the Cubs still managed a 2-1 night on the diamond.

That makes five straight days of at least .500 ball and four consecutive days with a winning record. When you look at how much the organization has struggled to win games over the past year, this is an encouraging sign for what could be a great year this year.

If you thought the Cubs had offensive struggles in Atlanta, Iowa was different as they managed just one hit in the loss. Not only did they have just one hit, but if it weren't for the P.J. Higgins single in the ninth inning, Iowa would have been no-hit on the evening.

Although Osvaldo Bido only went 3 2/3 innings in his start, he didn't allow a run nor a hit despite walking five hitters. He turned things over to a bullpen that kept the party going as they allowed just one hit. Given how much of a struggle it was for Iowa, the first inning RBI triple by Mason Martin was all the offense the Indians would need as they led 1-0 after one.

Former Cubs farmhand Taylor Davis added an RBI single in the fourth before Indianapolis pushed across two more runs in the eighth to win.

On the strength of a four-run inning and a strong showing from the ever-improving bullpen, the Smokies stayed hot to top the Lookouts 5-4. Manuel Espinoza took the ball for the start and allowed three runs in three innings, with all three of those runs coming in the fourth.

He gave way to Blake Whitney, Kyle Johnson, and Bryan Hudson as the trio allowed just one run over the final five innings of work. The Smokies got off to a fast start from an offensive side of things as they made Eduardo Salazar pay.

It was deuces wild for the Cubs in the first inning as a string of doubles pushed across four runs. The first two came off the Bryce Ball double, with the scorching Nelson Maldonado grabbing a pair with his double.

Leading 4-0 in the fourth, Chattanooga finally got to Espinoza as it was their turn to put together a massive inning. Most of the damage came on the Matt Lloyd three-run shot as all three runs were charged to Espinoza. Later in the inning, Quin Cotton picked up an RBI single, and just like that, it was a 4-4 game.

Not to be discouraged, Tennessee retook the lead in the fifth with Nelson Velazquez homering, putting the Smokies in front 5-4. It was the sixth homer of the season for Velazquez and fifth in as many games as he is starting to look like the 2021 version of himself.

That would be all the offense the Smokies would need as the bullpen took care of the rest to seal the win.

The night's best performance came from South Bend as they dominated Quad Cities in every facet. Jordan Wicks continues to improve from each outing as the 2021 first-round pick gave South Bend four innings of one-run ball. Wicks allowed four hits with five strikeouts as his ERA sits at 3.18.

While he was on top of his game, Wicks was given plenty of help, starting with Jake Washer and his two-run shot in the second to put South Bend on top. Not only was that Washer's third homer of the season, but it was his third in two games.

The lone run Wicks allowed game in the bottom of the second inning with Juan Carlos Negret picking up an RBI single to make things 2-1. South Bend had plenty of homers to go around, with Bradlee Beesley grabbing his first in the top of third with Alexander Canario adding one later in the inning to push the lead to 4-1.

Add a fifth-inning single from Matt Mervis, a wild pitch in the sixth, and South Bend built a 6-1 lead. With one homer in the game, Canario upped the ante as he connected for his second homer and third of the season in the seventh to cap off the Cubs, scoring with an 8-1 lead.

So nice he did it twice.@Cubs No. 18 prospect Alexander Canario smacks two home runs for the @SBCubs! pic.twitter.com/AFMSXVA0oP

The River Bandits added an eighth-inning run, but it was not enough as South Bend picked up the huge win. Not only did Canario and Washer homer, but each of them had three hits in the game to pace the offense. Ed Howard picked up a hit while Jordan Nwogu went hitless and saw his average fall to .148.

Tonight's (4/26) game has been postponed due to weather. It will be made up as part of a 7-inning double header on Wednesday, April 27.

Tickets for tonight's game will be honored for both games.