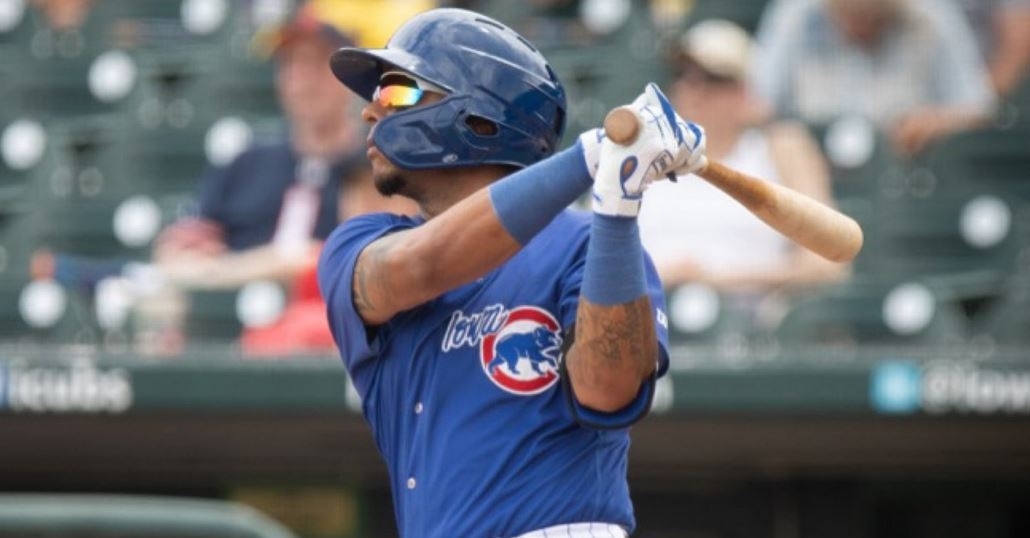 The Cubs continued to play winning baseball down on the farm, posting a 3-2 record for the second straight night as they head into the weekend on a positive note. While the pitching was the name of the game on Thursday, the offense put on a display like no other in a couple of those wins as the Cubs bats are starting to come to life.

It took 10 home games, but the Cubs were finally able to beat the Saints at home 15-2. Matt Swarmer delivered six strong innings on the mound while the offense pounded 22 hits in the dominating win.

The Iowa offense made their presence felt in the first inning, pushing across five runs to take a 5-0 lead. Michael Hermosillo opened the scoring with an RBI double, while Tony Wolters and Tyler Ladendorf added an RBI double and single later in the frame to push the lead to 5-0. Following a Ladendorf solo homer in the third, Wolters reached on an error in the fourth before Ladendorf came through with another RBI hit. Ian Miller added a sacrifice fly to give the Cubs a 9-0 lead through four.

One inning later, the Wolters and Ladendorf show continued as they brought home two of the teams three runs that inning, with Vance Vizcaino adding a single as Iowa was in front 12-0. That score would up until the bottom of the eighth when Alfonso Rivas connected for his third homer of the season to push the lead to 14-0 before another Vizcaino single gave Iowa a 15-0 lead.

Saint Paul put an end to the shutout bid in the top of the ninth as Sherman Johnson picked up an RBI single off Tommy Nance, but it was nowhere enough to top the Cubs. Ladendorf had a monster game at the plate, collecting four hits to go with five RBIs. Rivas and Vizcaino added three hits each, while Wolters picked up two hits to go with his four RBIs.

We end the losing streak with a dominant 15-2 win! pic.twitter.com/YqN73BKqnd

The Smokies offense was alive and kicking, pushing across 10 runs in the first two innings before holding on for a 12-8 win. Peyton Remy wasn't at his best on the mound as he was roughed up for five runs in three innings, but thankfully the offense did their job.

Darius Hill homered in the top of the first to give the Smokies a 1-0 lead, but it was in the second when things were blown open. D.J. Artis extended the lead to 3-0 with an RBI double in the second before a Carlos Sepulveda groundout made it 4-0. After an error made it 5-0, Brennen Davis singled to keep the line moving as the Smokies built a 7-0 lead. Nelson Maldonado then capped off a nine-run second inning with a three-run tater as the Smokies took a commanding 10-0 lead after two.

Up 10-1 after the second, the Lookouts began to battle back in the third, using a four-run inning to pull within 10-5. Wilson Garcia picked up an RBI double during that rally while Yoel Yanqui added a sacrifice fly. Mark Kolozsvary cracked a homer to end the scoring in that frame.

With Chase Strumpf picking up a sacrifice fly to extend the lead to 11-5 in the fourth, the

Lookouts continued to battle back in the sixth with another three-run frame before adding another run in the seventh. A Sepulveda RBI groundout in the top of the ninth capped off the scoring as the Smokies win again 12-8.

Not only did Hill have a homer, but he led the offense with three hits after going through a bit of a slump. Davis, Maldonado, and Artis added two hits while they were responsible for seven of the team's 11 RBIs. Morel saw another hitless day at the plate going 0-5.

After dominating the first three games of their series, the Cubs were finally held in check as M.D. Johnson and company held the Cubs to just two hits in a 2-0 win. 2019 first-round pick Ryan Jensen was on the mound as he hoped for a great outing. After suffering through some rough times recently, Jensen was on the short end of a hard-luck loss, allowing one run on one hit in five innings to go with six strikeouts.

The lone run he allowed was the only run the Snappers needed as Troy Johnston picked up an RBI groundout to give Beloit a 1-0 lead. With Joe Nahas on in relief of Jensen in the sixth, Griffin Conine took him deep for his 19th homer of the season, padding the Snappers lead 2-0. That is all they needed as the Cubs bats were silenced in the defeat.

Nelson Velazquez and Edmond Americaan were responsible for the Cubs hits in the loss, while Grayson Byrd, Tyler Durna, and Ryan Reynolds added walks for the remaining baserunners.

Cubs four-game winning streak comes to an end despite another stellar start from Ryan Jensen. pic.twitter.com/Xv0Hsud1Wb

The Pelicans continue to battle through offensive struggles of their own, as they were held to just five hits in a losing effort. Jose Miguel Gonzalez got the start and labored through four innings, where he was charged with four runs on seven hits.

Three of those runs came in the first two innings, including a bases-loaded walk to Landon Stephens in the first to give Augusta the lead for good 1-0. After a Braulio Vazquez homer and Cade Bunnell single made things 3-0 in the second, Gonzalez was able to settle in for a bit allowing another Bunnell single in the fourth to cap off his final line on the mound.

That four-run lead was more than enough for Augusta as a Pelicans error in the sixth helped pad the lead to 5-0 before Willie Carter made things 6-0 in the eighth with an RBI single. Matt Warkentin put an end to the shutout bid in the night with an RBI double, as that was his first double of the season in a 6-1 loss. With just five hits, not much went right as Jonathan Sierra, Matt Mervis, Ethan Hearn, and Luis Verdugo joined Warkentin with one hit apiece.

The Cubs took what was an offensive show early from both teams and turned it into a one-sided slugfest as they downed the Diamondbacks 19-6 to move to 6-3 on the season. Offensively, Ronnier Quintero got the scoring started as he belted a three-run shot in the second for his first homer of the season. Add in an Ezequiel Pagan sacrifice fly and a wild pitch, and the Cubs had a commanding 5-0 lead early.

The Diamondbacks had a big inning on their mind also, and they answered the Cubs five runs with five of their own to tie the game up 5-5 after two.

Singles by Luis Rubio and Jose Curpa got things started before a wild pitch made things 5-3. Endy Estrada capped off the big inning with a homer of his own as the two sides brought their hitting shoes.

The rest of the game was all Cubs as they outscored the Diamonds 14-1 the rest of the way. Two of those runs came on a fourth-inning Pagan double before Yeison Santana singled home another run in the sixth to make things 8-5. After Curpa closed within 8-6 with an RBI single in the bottom of the sixth, the Cubs offense exploded once again across the final three frames.

The seventh inning is when most of that damage was done as the Cubs brought home eight runs to push the lead to 15-6. Ismael Mena and Malcom Quintero got the scoring started with singles before Manny Collier earned a bases-loaded walk to make things 11-6. Pagan continued to the scoring barrage with another RBI hit before Santana, and Miguel Fabrizio helped cap off the scoring in what was now a 16-6 lead.

The Cubs added three more runs across the final two frames as they continue to show their offensive power in a 19-6 win. Despite collecting just two hits, Pagan had a big day accounting for five RBIs. Fabrizio led the offense with four hits, while Malcom Quintero added three of his own. After spending most of the season with Myrtle Beach, Santana was sent to Arizona, picking up an RBI hit. Reggie Preciado continues his great start as he also picked up one of the 16 Cubs hits.