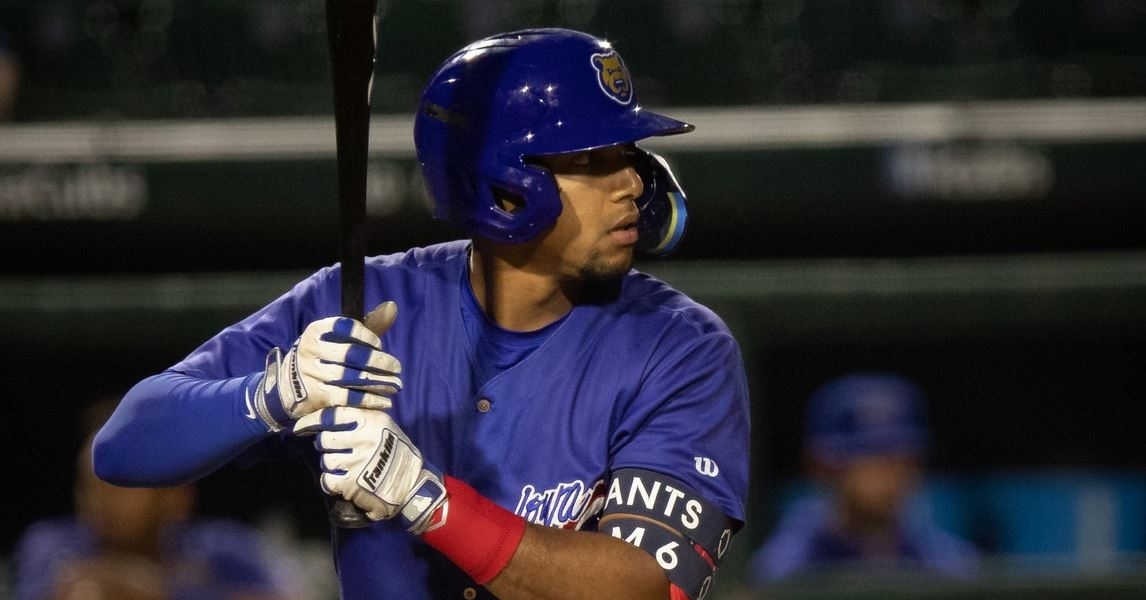 Not only are the Minor Leagues busy on a nightly basis, but when you add in rainouts, there were more games to the table on Thursday. That was the case for the Cubs organization, as all four teams were in action playing five games.

South Bend had that extra game with their doubleheader while the rest of the organizational affiliates played their regularly scheduled contests. From a results side of things, the Cubs went 2-3, but there was still plenty of action.

After winning their first two home games of the season, Iowa had a slight setback last night, falling 8-6. However, it didn't come without a fight as the Mud Hens rallied for three runs off Ben Leeper in the ninth for the win.

Eric Stout got the start in this one, giving the Cubs three scoreless frames while the offense went to work early. P.J. Higgins left the yard in the first for his first homer of the season, giving Iowa the 2-0 lead. One inning later saw Levi Jordan add his second homer of the season as Iowa was up 3-0.

Following Stout's outing, Eric Yardley was called upon and was not as sharp. He not only allowed a two-run Jacob Robison triple, but he was charged with three earned runs in his outing. Fortunately for him and the Cubs, Narciso Crook added another homer as Iowa maintained a 4-3 lead. In the sixth, a Ryan Lavarnway homer tied things up before Iowa added a pair of runs later to take the 6-4 lead.

Leading 6-5 in the ninth, it was time for Leeper to come into the game as he looked to secure the save. Not only did he blow the save allowing a game-tying homer to Jamie Westbrook, but Leeper uncorked a pair of wild pitches later in the frame to push across two more runs. Those runs proved to be the difference, with Toledo picking up the 8-6 win.

Although the scoreline indicates a lopsided game, one inning did the Smokies in as they allowed four first-inning runs. Cam Sanders received the brunt of that first inning barrage walking three hitters in just 2/3 of an inning and being charged with all four runs.

He gave way to Blake Whitney and Eury Ramos as they combined for 6 1/3 scoreless innings with one walk and eight punchouts. Whitey recorded six of those eight to go with no walks. With Sanders having the command issues he did, Montgomery was extra patient with Hill Alexander working a bases-loaded walk to put the Biscuits up 1-0.

That was when Jordan Qsar delivered the big blow, clearing the bases with a triple to extend the lead to 4-0. That would be all the offense Montgomery would need as they were able to keep the Smokies offense in check.

It took five innings for the Smokies offense to score, courtesy of Harrison Wenson and his RBI double. Montgomery pushed an eighth-inning run across off Burl Carraway while Nelson Velazquez capped off the scoring with his first homer of the season in the ninth.

After having Wednesday's game rained out, South Bend was set to play two on Thursday and took game one 7-2. 2021 first-rounder Jordan Wicks made the start giving the Cubs 3 2/3 innings of work, allowing just three hits to go with five punchouts.

Although unable to record the win, he did leave with the lead as South Bend gave him plenty of support. A Matt Mervis double in the second put South Bend in front for good 1-0, but it was the third when they did the most damage. Anchored by four walks and a hit by pitch, the Cubs pushed across four runs with Owen Caissie, Fabian Pertuz, and Scott McKeon taking bases-loaded walks and Caleb Knight getting hit.

In the fourth, South Bend continued to add to their lead, with Yohendrick Pinango going deep for the first time before the Pertuz homer gave the Cubs a 7-0 lead. After relieving Wicks, Max Bain was excellent across his first two innings before losing it a bit in the sixth. Bain was charged with two earned runs off the Jarryd Dale homer, but still managed to pick up the win.

After taking game one, the Cubs had the tables turned on them, with Fort Wayne coming out on top in this one. Chris Clarke got the start in this one and continues to search for his first career win in the minors.

Clarke had a rough go of things, allowing five runs in three innings of work as he put the Cubs in a big early hole. Two of those runs came in the first off an error and a Dale triple before Fort Wayne struck for three more in the third. Once again, a miscue aided in one of those runs, but RBI doubles by Joshua Mears and Dale pushed the lead to 5-0.

Hoping to battle back late, the Cubs picked up both of their runs in the fourth when Alexander Canario laced a double to make things 5-2. Unfortunately, that would be all the offense on the day for South Bend as Mears added a bases-loaded walk in the bottom of the fourth to cap off the scoring.

Cubs fall in Game 2 of the Doubleheader 6-2.

We're back to it tomorrow at 7:05! pic.twitter.com/aSqzR4nhOw

This is the series for fans who love good pitching. Nine combined runs have been scored through three games, with five of them coming on Thursday. You also have a pair of walk-off wins as the Pelicans walked off the Greenjackets for the second time 3-2.

Tyler Schlaffer has emerged as the ace of the Pelicans staff and continued to pitch well. Schlaffer allowed one run on two hits in his four innings while striking out five. As good as Schlaffer was, the real story was on the other side as his counterpart Royber Salinas was on a different planet.

Not only did Salinas allow just one hit, but he struck out 13 of a possible 15 outs and had the Pelicans looking foolish. He left with a 2-0 lead as Caleb Durbin homered in the first and then added a sacrifice fly in the fifth.

In what became a battle of the pens in the sixth, Myrtle Beach benefited the most from this as they got Salinas out of the game. Immediately following that, Liam Spence came through in a big way as his RBI double tied things up 2-2.

With Jose Miguel Gonzalez and Adam Laskey doing their jobs in relief, it gave the Pelicans a chance to win late. Still tied in the bottom of the ninth, Pete Crow-Armstrong led things off with a single before moving to second on a bunt.

He would then reach third base as Kevin Alcantara Miguel Fabrizo took walks to load the bases. With the bases loaded, Reggie Preciado could not come through, which set the stage for Ethan Hearn. Hearn did just what the doctor ordered as his single up the middle provided the winning run with the Pelicans taking it 3-2.

The video from the seats-

The call from the booth.

Two walk-offs in three games in the home-opening series for @Pelicanbaseball ! pic.twitter.com/HghKiKcL2Y