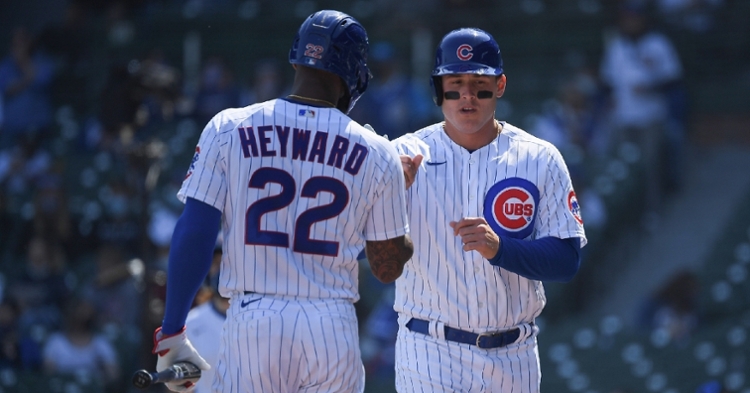 The Cubs are only 2.5 games back in NL Central (Quinn Harris - USA Today Sports)

Another week has come and gone in the NL Central, and the division has seen a lot of movement throughout. But, in a division with no clear favorite and an expectation of constant competition, the division has not disappointed.

We’re here to break down the action of the NL Central after about 40 games of the young season.

St. Louis Cardinals 23-18: Of all the teams that could be called a favorite to win this division, the Cardinals were the closest to it — and they are starting to look like it. However, a tough stretch as of late has narrowed the gap in the NL Centra. Nolan Arenado and Paul Goldschmidt have anchored a lineup that has been aided by a strong pitching staff - including Jack Flaherty’s league-leading 7-0 record. The Cardinals won two of three from the Brewers since we last updated. They also were swept over the weekend by a depleted Padres team.

UP NEXT: This week, the Cardinals have a two-game series with the Pirates at home offset by two off-days, and then they host the Cubs for three games over the weekend as these teams meet for the first time this season.

MILWAUKEE BREWERS 21-20 (2 games back): The Brewers have slipped a bit lately but still remain in playoff position early, and their pitching staff is a huge reason. Corbin Burnes is off to a historically dominant start, with over 55 strikeouts before his first walk issued. In addition, Freddy Peralta and Brandon Woodruff round out the division’s top starting rotation, and the bullpen boasts Devin Williams and Josh Hader. Milwaukee hasn’t had to put many runs on the board to win, and a lineup that has added Kolten Wong and Jackie Bradley Jr. has been good at manufacturing runs. Getting Christian Yelich back to form is a huge priority for the Brewers.

Since we last recapped, the Brewers lost two of three to the Cardinals before dropping two of three against the Braves over the weekend.

UP NEXT: This week, the Brewers have a two-game series with the Royals in Kansas City offset by two off days and then a weekend trip to Cincinnati to battle the Reds.

Chicago Cubs 20-20 (2.5 games back): The Cubs have been a very rocky team so far in 2021. It’s been shaky in the starting rotation except for Jake Arietta and Adbert Alzolay. The bullpen has been a bright spot — highlighted by closer Craig Kimbrel who has been fantastic as some youngsters in Keegan Thompson, Justin Steele, and Tommy Nance.

The offense has been one of the best in the majors since their historically slow start, led by Kris Bryant’s .303 batting average and 10 home runs. In addition, Javier Baez has been near the NL lead in RBIs, while Matt Duffy has provided some versatility and contact to a lineup that desperately needed it. Since April 17th, the Cubs have been one of the best offenses in the big leagues and could use some better starting pitching to keep pace in the NL.

Since the last time we recapped it, the Cubs were swept in a two-game series with the Indians, and then the Cubs took two of three from the Tigers in Detroit over the weekend.

UP NEXT: The Cubs play host to Jon Lester, Kyle Schwarber, and Washington Nationals (whom they beat on Monday) for four games and then head to St. Louis to battle the first-place Cardinals over the weekend.

Cincinnati Reds 19-20 (3 games back): The Reds have seen some time leading the division, riding a hot offense to a strong start — but have since dropped off slightly. Last season, it was all about pitching for the Reds — and the team is still waiting for some strides to be made on that side of the ball. Nicholas Castellanos’ suspension for playing a passionate brand of baseball has been a popular storyline for this ball club early on as well.

Since we last updated, the Reds took two of three from the Pirates and then split a four-game series with the Rockies in Colorado.

UP NEXT: This week, the Reds host San Francisco for four (whom they lost to on Monday) and finish the homestand with three against the Brewers.

Pittsburgh Pirates 17-23: The Pirates were widely expected to finish last in this division, and after a wildly impressive first few weeks, have fallen back into the last place in the NL Central. However, regardless of placement in the division, the Pirates are definitely showing signs of improvement.

Since we last talked, the Pirates lost two of three to the Cincinnati Reds and then split a four-game set with the Giants.

UP NEXT: This week, the Pirates are on the road for two against the Cardinals and then four against the Braves.