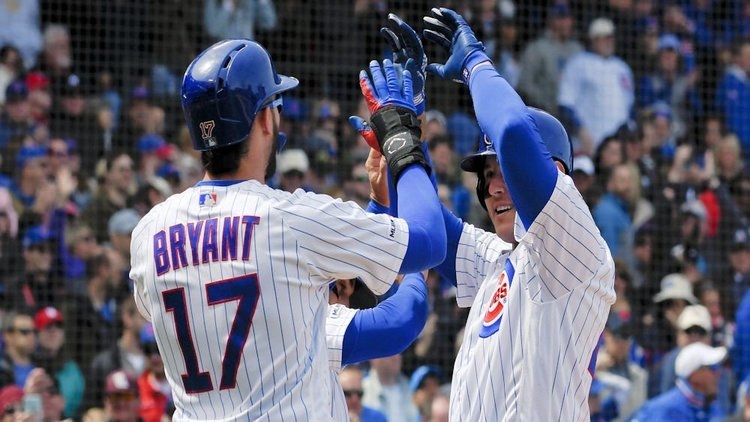 As we approach the official start of summer, the Cubs and Brewers remain flipping and flopping on top of Major League Baseball’s most challenging division.

Here is where we stand in the NL Central in mid-June.

BREWERS: The Brew Crew had a week they would wish to forget, playing a few weaker teams and unable to put some distance between them and the Cubs. Milwaukee began the week against the AL West-leading Astros and split with them. Over the weekend the Brewers struggled against the San Francisco Giants and was able to win just one game. The Brewers started this week with a loss to the Padres as well. The Brewers continue to hit homers, with Christian Yelich leading the league in bombs. The Brewers will welcome Jhoulys Chacin back into their starting rotation, where they could use all the help they can get.

ON DECK: The Brewers take on the Padres, and the Reds as their stretch against below .500 team continues through this week as they take on Mariners, Pirates, Reds, Pirates, and the Giants before taking on an above average team in the Braves.

WHO'S HOT? Another week of baseball, another week of Yelich dominance. The left-handed MVP candidate hit another pair of homers last week, drove in four runs, and hit at a .357 clip. Yasmani Grandal homered twice and drove in eight runs last week as well as hitting over .300. Josh Hader did not give up a run this week, and Brandon Woodruff delivered a quality start for the Brew Crew.

WHO'S NOT? Lorenzo Cain (.192) and Orlando Arcia (.091) are hitting over .100 points apart in the last seven games, and both are well below .200. The pair only combined for one run driven in. Jimmy Nelson offered a miserable startup for the Brewers, and Freddy Peralta gave up six runs in his only start this week.

CUBS: The Cubs limped to the finish line after their difficult trip west. The Cubs watched a few games slip away mostly because their perfect game never lined up. In the past week, it seemed like when one of MLB’s best lineups score, the pitchers give up a load of runs as well. When the Cubs’ old reliable rotation pitched admirable, the offense couldn’t buy a hit with runners in scoring position. The Cubs dropped a pair of games against the Rockies and three against the NL best Dodgers and look to this week for their schedule to both get easier and more comfortable at home.

ON DECK: The Cubs take on the cross-town rival White Sox and then the former division opponent Mets. After that, the Cubs play the Braves and then do not see another above .500 team until the Brewers in late July. As the schedule begins to lighten up for the Cubbies, expect Joe Maddon and the Cubs to ride the top five guys in that order in Schwarber, Kris Bryant, Anthony Rizzo, Javy Baez, and Willson Contreras to continue to get on, drive in runs and hit the long ball. Although their most reliable starter in Kyle Hendricks went down with an injury, the Cubs look forward to his return and Craig Kimbrel’s arrival.

WHO'S HOT: In the past week, Kris Bryant is hitting .333 with a pair of solo shots and walked more times than he struck out. Anthony Rizzo and Kyle Schwarber each launched long balls this past week and Contreras sits above .300 in the week as well. Both Cole Hamels and Yu Darvish have been studs for the Cubs as of late. Combined they averaged an ERA around 1 with 19 strikeouts in the week that as just passed, while Pedro Strop is looking to find his groove on the mound in the late innings.

WHO'S NOT? Javy Baez and Addison Russell up the middle are both hitting .160 or below in the last week. Although Javy Baez contributes in many ways, a slump may account for one of the reasons the Cubs struggled scoring runs in the past week. In the past week, Jon Lester’s ERA is over ten as he has struggled over his past few starts, he will look to get back on track against the White Sox and Lucas Giolito this week.

CARDINALS: The Redbirds find themselves inching back up in the NL Central division race. The Cardinals look to lack the pitching to be division contenders but certainly seem to be in the mix for the wild card race. The Cardinals are stacked with star power in their line up with Matt Carpenter, Marcel Ozuna, Paul Dejong and a Paul Goldschmidt who has yet to get going yet. They will look to add arms near the deadline to complete this team. The Cardinals had a strong week against bad teams, as they combined to win four of six against the Marlins and Mets and took game one in a second Marlins series Monday. ON DECK The Cards take on the Marlins in St. Louis this week and then welcome Albert Pujols back to Busch Stadium over the weekend.

WHO'S HOT? Paul Dejong looked like an all-star in his past week clubbing three dingers and hitting a robust .367. Dexter Fowler also launched three rockets and drove in 10 runs for the Cardinals. Kolten Wong also grabbed eight hits last week and hit .333. Dakota Hudson delivered a pair of solid stars for the red birds, earning himself an ERA below three on the week. Flamethrowing Jordan Hicks did not give up a run in the past week as well.

WHO'S NOT? Paul Goldschmidt is still scuffling at the plate, he hit a paltry .125 in the last week. As the Cardinals try to win and win now, they need their big money acquisition to perform. Michael Wacha threw a stinker, giving up five runs in only four innings.

REDS: The Reds have jumped the Pirates and are finally not in last place. There are multiple pieces on their pitching staff meeting their potential and shutting down opponents. But the key to the Reds’ most recent success has been the lineup hitting from top to bottom and not having an easy out. Joey Votto, Eugenio Suarez, and Nick Senzel have all been contributing heavily to the Reds’ winning ways. The Reds had an okay week, splitting a series with the Indians and losing two of three to the Texas Rangers. The Reds started this week off right with the Astros, beating them 3-2.

ON DECK: The Reds finish their series with the Astros and then play the Brewers for four games in Milwaukee.

WHO'S HOT? Yasiel Puig launched a pair of bombs, drove in four runs, and hit .435 in the week that was. Jesse Winker drove in five and hit .308 for the Reds. Luis Castillo delivered two good starts for the Reds, struck out 13, and had a 2.25 ERA.

WHOS NOT? Derek Dietrich hit only .067 last week, and Eugenio Suarez hit .136. The Reds good hitter struggled at the plate last week. Wily Peralta had a 40.50 ERA, and Sonny Gray’s start was not great although he did strike out 8.

PIRATES: The Pirates have fallen to last place in baseball’s best division. Even though they have been riding the offensive heroics of hopeful MVP candidate and most likely NL’s first base representative in the all-star game in Josh Bell. What Bell shows how great the NL is, he is hitting like an MVP and may not even be the best first basemen in the league where Freddie Freeman plays, and Christian Yelich and Cody Bellinger are having historic seasons which leaves Josh Bell on a last place team nearly forgotten. The Pirates got swept in four games by the Braves and took two of three from the Marlins last week.

ON DECK: The Pirates take on the Tigers and the Padres in Pittsburgh this week at PNC Park.

WHO'S HOT? Bryan Reynolds continues to rake for the Pirates as he led the way with a .526 average last week. Josh Bell had a .292 average with a homer and seven runs driven in and five other players on the Pirates had averaged over .300 last week. Francisco Liriano had a good week for the Pirates, who did not allow a run in three innings.

WHO'S NOT? Gregory Polanco hasn’t been great for the Pirates and as a result, has been losing some playing time; Polanco hit only .154 last week. In two starts, Chris Archer threw 11 innings and gave up 11 runs so not a great week for him.

As the rest of the year continues to unfold, look for the Cubs and Brewers to battle for the top spot as the Reds and Pirates duke it out to not finish last in this ever competitive division. As it is right now, the Brewers have only a 0.5 game lead over the Chicago Cubs.