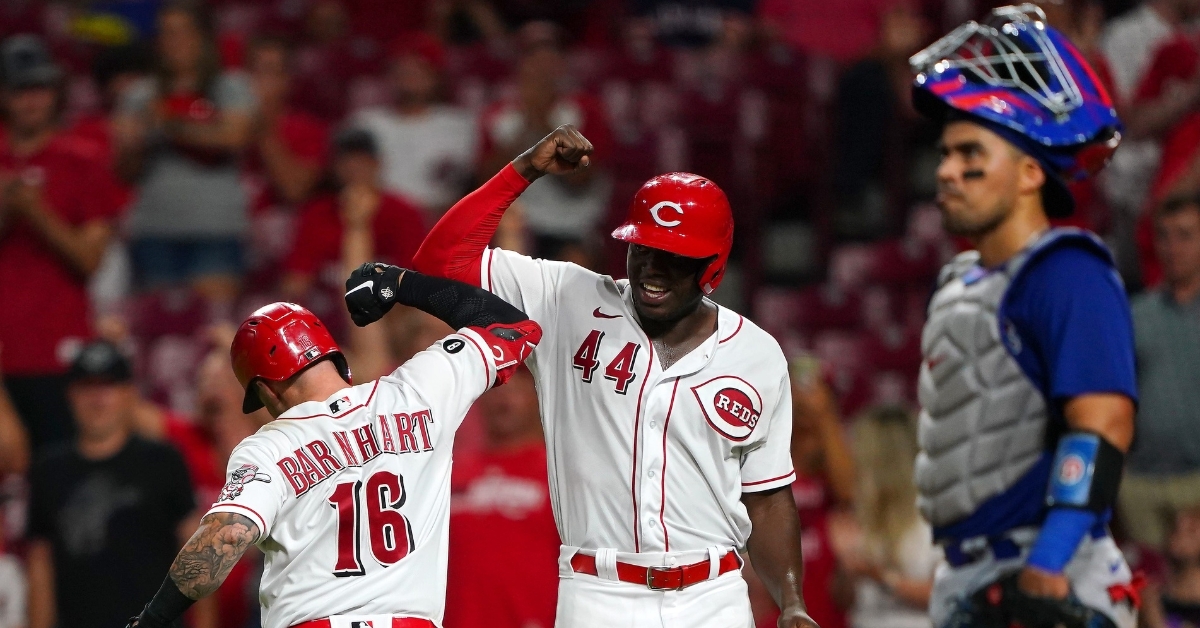 The Cubs are getting closer to history and certainly not in a good way. Not only have the losses been piling up, but piling up in a big way as the Cubs dropped their 12th consecutive game against the Reds Monday. It was the team's longest losing streak since the 2012 season and just two away from their franchise record of 14.

With Justin Steele on the mound against Wade Miley, things were not all that bad in the early going as the teams played to a 0-0 score through four innings. For the most part, Steele continues to pitch well, but for the second straight start was bitten by the long ball and lack of run support. This time, Jonathan India got the best of him, taking a heater deep towards left field for a two-run shot and 2-0 lead. That would be the only runs Steele would allow, but once again, with no offense, it was too much to overcome.

With Michael Rucker on the mound in the fifth, Aristides Aquino ended an 0-16 slump with a long homer to left-center field, which put the Reds in front 4-0. That was just the beginning of a rough night as Rucker was charged with six earned runs in two innings of work. The seventh inning saw a ton of milestones reached by the Reds as their bludgeoning of Chicago continued.

Not only did Joey Votto reach his 2000th hit, but the Reds pushed across eight runs in that inning to take a 12-0 lead. It was the 18th time this season where the Reds have scored 10 or more runs for the most in the MLB. Kyle Farmer started the massive inning off with an RBI double before an Aquino walk stretched the lead to 6-0.

Tyler Naquin kept the line moving with an RBI single, with Tucker Barnhardt following suit with a sacrifice fly. With the bases now loaded, India came through another clutch hit as his RBI double cleared the bases and pushed the lead to 11-0. Votto would then collect career hit 2001 as his single had the Reds up 12-0.

Even with another massive deficit which is something the Cubs are getting used to lately, the Cubs refused to give up and did their best to climb back into things in the eighth. Not only did Rafael Ortega lead the inning off with a single, but Matt Duffy and Frank Schwindel followed that with singles of their own to load the bases with no outs.

After a pair of strikeouts had the Cubs in danger of not scoring, Robinson Chirinos flared one to left, pushing home a pair. Jason Heyward and Ian Happ collected RBI doubles after that as the Cubs plated five runs in their half of the eighth to close within 12-5. Barnhardt capped off the scoring in the bottom of the eight as his two-run shot was the exclamation point on a 14-5 beat down.

While the Cubs had Kyle Hendricks streak of starts without a loss, Miley is on a nice run of his following his seven-shutout decision. Not only did he win another game against the Cubs, but it was the 14 straight start without a loss for Miley, by far the most in his career. It is also the second-longest in Reds history, only behind Mat Latos.

While Miley may be a lefty, he draws many similarities to Hendricks in how they pitch. Not only do both of them feature some of the slowest average fastball velocity in the game, but both love to work fast and keep their opponents off balance. Miley stuck with that game plan, and the Cubs had no chance against him.

Take away his first start against the Cubs this season, and he has looked outstanding against them, which follows his career track record. For whatever reason, Miley is at his best against this team, and that is something the Cubs would love to shake as 2021 ends and 2022 begins.

There was a time this season where the Cubs looked like a playoff-caliber baseball team. That wasn't that long ago either, as the Cubs were sitting at 38-27 on June 13th and were leading the NL Central. In the games since, the Cubs have not only suffered two losing streaks of at least 11 games, but have posted a 14-42 record and are now 52-69 on the season.

That 14-42 record is not only reaching new lows for the franchise, but has been the worst record in all of baseball, even behind the Orioles and Diamondbacks. A lot of this has to do with their 1-14 start to August, but things were getting bad already in June when they suffered their first of two 11 game losing streaks and went from being tied for first to eight games out in the process.

When that happened, the Cubs fate was sealed, and it was open season in terms of in-season trades to be made. With practically a AAA roster on the field, wins have not only been hard to come by for the better part of two months but will be hard to come by the rest of the way.

There is no secret to the game of baseball that team's tank whether fans want to believe it or not. While most understand the concept of getting the best draft pick possible, that doesn't mean it's right, as it means you are quitting on the season.

Fans deserve better than that as they're the ones paying to watch this team with their hard-earned money only to see a team that looks lost in all phases. It would be one thing if the Cubs were at least trying to win, but they are blatantly tanking to the painfully obvious point. This will continue to happen until the league addresses it, but how to go about that is the real question.

With both the Cubs and Orioles riding 12 game losing streaks at the moment, that marks eight losing streaks of at least 11 games this season, the most in the Modern-Day era. All six or seven of those teams are the ones near the bottom of the standings and are fighting to better their draft picks.

We have seen the NBA and NHL go with a draft lottery in hopes of preventing tanking. Could the MLB be in line to discuss that? I am not sure if a lottery is the way to go, but something needs to be done to prevent tanking or at least tanking to the point it is obvious.