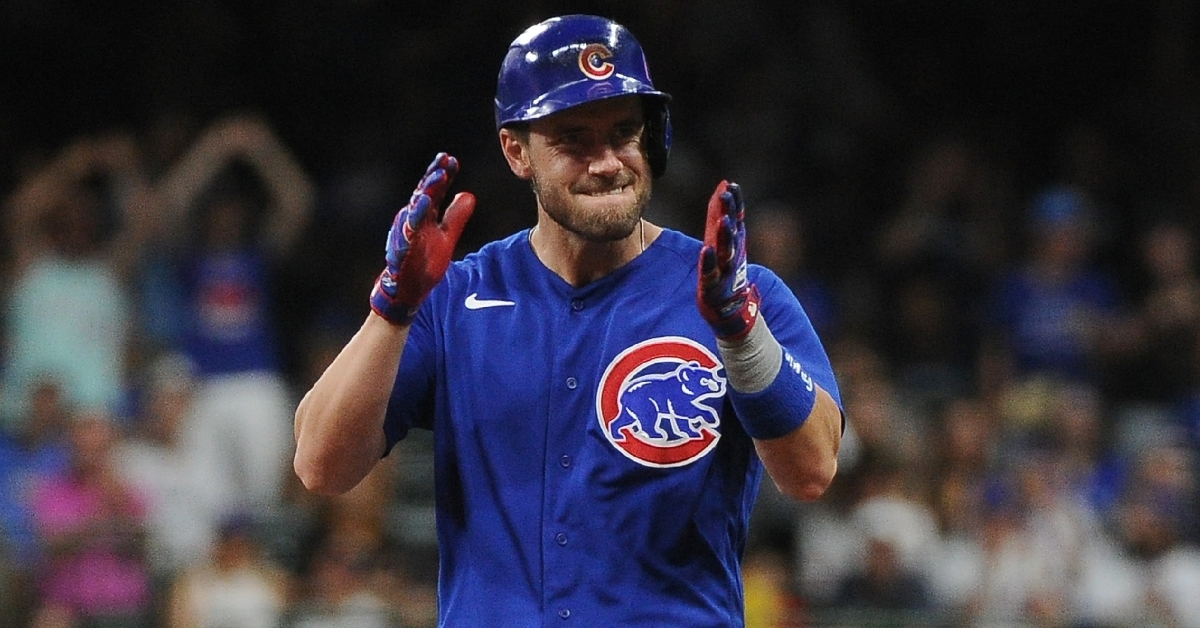 What is it going to take for the Cubs to beat this Brewers club? After surrendering 14 runs on Monday, including 10 in the eighth inning, the Cubs got a fabulous pitching performance from Zach Davies and company and limited the Brewers offense to just two runs on Tuesday. Unfortunately for them, Brandon Woodruff was on the hill for Milwaukee, and he was a tad better as he held the short-handed Cubs to one run as the Brewers came away with a 2-1 win.

Not only did the Brewers make Davies work in the first, but they made him work all night long as the right-hander was pulled after four innings of two-run ball to go with three walks and six strikeouts. It was his pitch count that got in the way as Milwaukee did a great job seeing as many pitches as possible, with Davies falling just short of 90 through four.

Three batters into the game saw the Brewers jump in front 1-0 after Willie Adames earned a one-out walk before racing around to score on a Christian Yelich double. The Cubs have done a great job keeping Yelich in check most of the season, but it appears he is starting to heat up, which is bad news for the rest of the NL Central who are looking up at Milwaukee. Getting the start for both Anthony Rizzo and Kris Bryant was Patrick Wisdom as he continued his excellent season.

After struggling throughout the Dodgers series, Wisdom is still working on the adjustments that will make him an everyday player, and he continues to come up clutch. Not only did he hit a game-tying pinch-hit homer on Monday, but Wisdom drove home the Cubs lone run last night with an RBI double in the fourth to tie things up 1-1. That was all Woodruff allowed as he struck out eight batters and scattered just four hits in six innings of work.

The Brewers were able to take the lead for good in the bottom of the fourth when Jace Peterson singled to right off Davies. Initially, that single wouldn't have led to a run, but a fielding error by Jason Heyward not only allowed Peterson to reach second, but allowed Yelich to come home and score the winning run. The Brewers bullpen took care of the rest from there as both bullpens pitched well on this night, but it was the Brewers securing their seventh straight win and moving to five games up on Chicago.

The Brewers are the Cubs' Kryptonite

There hasn't been a team that has had the Cubs number like this in a long time, but the Brewers own Chicago this season. Not only is the fourth of what will be six series against the two, but Milwaukee has won all four series to start the season and is 8-3 against Chicago. Ironically, that five-game difference is also the advantage they have in the NL Central as the teams would be even had they not faced each other yet.

The Brewers' success against the Cubs has been building since the end of 2018 after the Cubs dominated this rivalry for a long time. Milwaukee has the starters that can give this offense fits, while their offense seems to come up with the clutch hits when the game is on the line. Unless the Cubs can practically run the table the rest of the way against Milwaukee, there is no way they win the season series against them. That alone could seal their fate come to the end of the season.

What did Chicago do to deserve this?

Just when we talked about the Cubs getting healthier the other day, the Baseball Gods said "No Way" as they continue to be hampered with more and more injuries. At this point, it is sickening the luck this team has endured, and you have to wonder who they upset to be injured as much as they have been.

With Anthony Rizzo still out of the lineup with lower back pain, the Cubs also found out that Kris Bryant would be out last night as he was dealing with some soreness of his own. While his injury may not be all that bad, anytime, you continue to lose players, even if for a game or two, the injuries start to take their toll, which they are now.

To make matters worse, Ryan Tepera was coming off his worst outing of the season and now finds himself on the 10-Day IL with a left calf strain. You have to wonder if that was part of his issue on Monday, as he didn't look like the same pitcher. Finally, the worst news of all last night surrounded Matt Duffy, who has been placed on the 60-Day IL with his bulging disk in his back.

Typically, 60-Day IL injuries end your season, but considering Duffy has been on the IL for a while, the Cubs can backdate it, and there is hope that he returns by late July at the earliest. The Cubs could use Duffy, and his approach in their lineup as the team seemingly started to win when he was playing every day. This has been an issue for him his entire career, and it is just hard to watch when you see the start he got off to.

Another season/Cubs debut for the pitching staff

One of the only positives to take away from the injuries this season is that the Cubs have seen many young guys get called up and produce immediately. That bodes well for this team's future as it could help speed up a rebuild if that is the direction this team is headed.

Last night saw another pitcher not only make his season debut, but his Cubs debut in relief as left-hander Adam Morgan took the mound in the eighth inning after replacing Trevor Megill on the roster. The 31-year-old former Philadelphia Phillies pitcher started his career as a starter, but has spent most of his time as a reliever compiling a 13-27 career record with a 4.82 ERA.

After dealing with his fair share of injuries, the Cubs elected to sign him to a minor league deal where he spent the entire season with Iowa up until his season debut last night. He was one of those pitchers that I thought had a shot at making the team out of camp, especially when you consider the Cubs need for a lefty at the time.

In 15 games for AAA Iowa compiling 16 innings, Morgan was solid, going 0-1, but posting a 2.20 ERA. What stood out the most is his walk-to-strikeout ratio, where he has three walks to 21 punchouts. Morgan was not only looking strong in Iowa, but dominating hitters, which paved the way for his season debut last night. He went on to toss a scoreless frame of work and will now be in the bullpen for the next few days as the Cubs wait for Tepera to return.