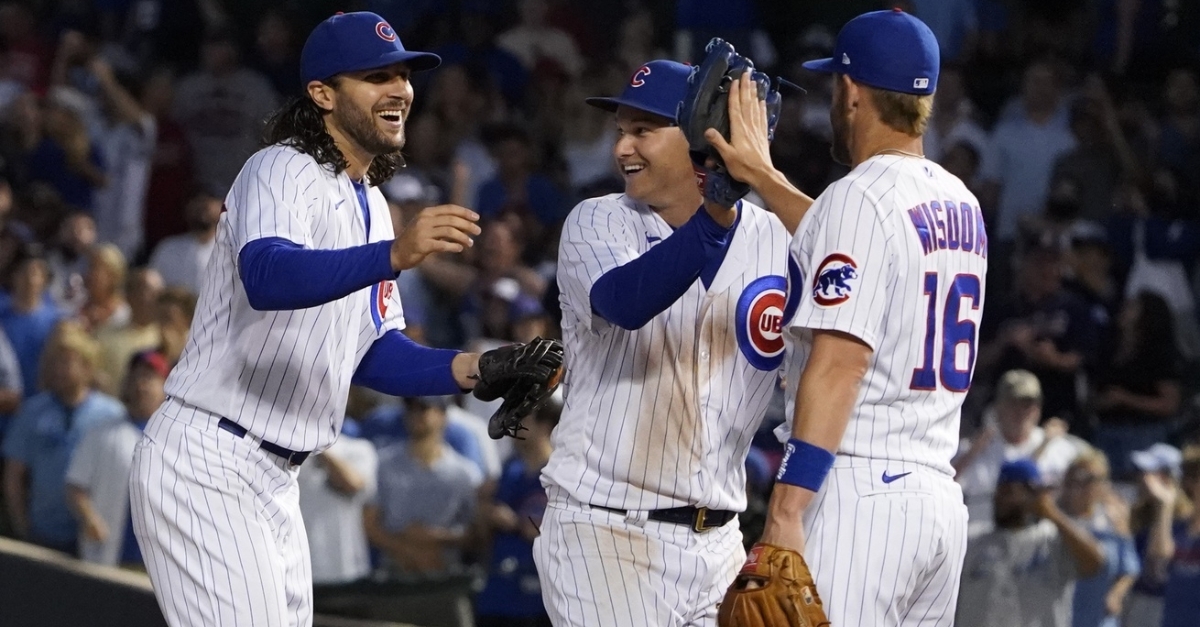 The fun is in the winning (David Banks - USA Today Sports)

In a second consecutive of what is to be four straight nationally televised games, the Cubs took to the field against the Cardinals with hopes of securing the sweep. In a matchup between a struggling Carlos Martinez and surging Zach Davies, this was the best game of the weekend if you are a fan of pitching as the teams combined for just two runs in the game.

Both those runs came across to score in the bottom of the third inning when Eric Sogard led the inning off with a hustling double only to be sitting on third with two outs. Thankfully, the Cubs wouldn't go away empty-handed as Joc Pederson reached first on an error by Paul De Jong, giving the Cubs a 1-0 lead. That is all they would need, but Anthony Rizzo added to the lead with an RBI single putting the Cubs in front 2-0.

The rest of the game was about starting pitching as both Martinez and Davies made it into the seventh inning before handing things off to the bullpen. Once again, the Cubs bullpen continues to get the job done as they shut the Cardinals bats out to pick up a 2-0 and another home series sweep. The Cubs are now a season-high 11 games over .500 and remain tied for first with the Brewers.

It has taken a while for Cubs nation to get behind Davies, but they are starting to see why the right-hander has performed so well in recent seasons. Another soft tosser like Hendricks, Davies lives by changing speeds while pitching to contact and letting the defense go to work. Unfortunately, that wasn't the case in April, as Davies had the worst month of his professional career.

Since then, Davies is starting to look like the Pitcher who ranked in the top five in ERA in 2020 and the one the Cubs were hoping for in the trade. He picked a perfect time to deliver his best outing of the season on Sunday as he had the Cardinals guessing. Not only did he make it into the seventh for just the second time this season, but he allowed no runs and limited the Cardinals to just two hits.

Davies also walked two and struck out six as he ended a stretch of 16 straight starts with five strikeouts or less. Going back to his time with the Brewers, Davies was also capable of these types of games, but they didn't happen enough. Across his last seven starts, these are the types of games the Cubs are continuing to see, and it is no surprise that Davies has lowered his ERA by nearly five runs.

For the Cubs to continue to be a threat in the National League, they will need their starting pitching to continue to improve. That has happened over the last month, and Davies is a big reason why.

What can you say about Kimbrel this season other than dominating. The 33-year-old closer is in the third year of his deal with the Cubs, and he is putting together an incredible start to the year. After struggling for most of his first two seasons in Chicago, Kimbrel has gotten back to his old ways this season, and the Cubs finally have the closer they have been waiting for since Wade Davies.

So far, Kimbrel has gone 17-19 in save opportunities while posting an ERA in the 0.6 range. He also has just eight walks on the season and is approaching 50 strikeouts in what has been a dominating start to 2021. Kimbrel has been great all season, but Sunday night may have been his best performance of the year.

Looking to lock down a 2-0 Cubs lead, Kimbrel took the ball in the ninth as he was set to face the middle of the order. Knowing the challenge he had in front of him, Kimbrel got downright nasty and made the Cardinals hitters look silly. Using his fastball-knuckle curve mix, the Cardinals hitters had no idea what was coming, and they were sent backing left and right.

Even though Kimbrel did walk the second hitter of the inning, he made up for it by striking out the side, including Nolan Arenado, Dylan Carlson, and Tyler O'Neil, who are three of the better hitters in that lineup. His fastball velocity was sitting around 99 MPH, and his curve had more break than what we have seen all season. He continues to be the dominating force the Cubs have hoped for, and it has been game over when he is on the mound.

Nolan came up as the tying run in the 9th.

Another big-time sweep at home

Not only was the sweep the fifth one at home this season, but it was the fourth one against a playoff worth team. So far, the Cubs have swept the Cardinals, Mets, Padres, and Dodgers at home, and all four of those teams should be in the playoff hunt all season.

That is a big deal when you consider how this team was viewed this season, and at this point, it is time the league takes notice that this team is for real. The team is playing great, especially at home, where they have the second-best record in all of baseball. With more road games than home games this month, should the Cubs remain in a great position, the second half of the season could be a special time for fans.