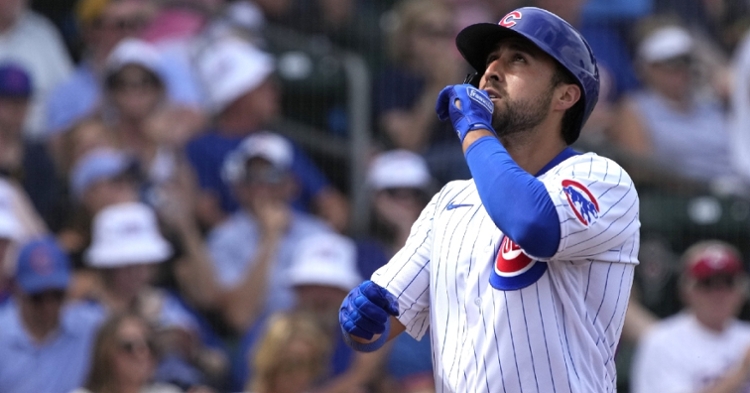 In case you haven't been paying attention the last several weeks, spring training is not only underway, but it is nearly complete. Given that spring will be cut in half this season and the Cubs continue to add pieces to their roster, you will see a different-looking spring than what fans are used to.

Typically, you would see more minor league players getting at-bats during the final week of the season as the veterans have their reps in by then. This season it will be the opposite as more of the minor leaguers will play now while the veterans take over during the back half of the spring.

Coming off their first win of the spring, the Cubs were back on the field Sunday as they welcomed in the San Diego Padres. Justin Steele is looking to lock down a spot in the starting rotation, as he made the start against Reiss Knehr. What was a back and forth game most of the day saw the Cubs coming out on top as they used a trio of homers to win 5-4.

Although not as crisp as Marcus Stroman, Steele pitched well, giving up nothing in his two innings of work to go with a pair of strikeouts. With Steele doing his part on the mound, it was time for the Cubs offense to respond, with Alfonso Rivas coming through in the second. Not known for his power, Rivas more than got into a pitch and crushed it over the left-field fence for an opposite-field shot and 1-0 lead.

Sticking with the trend of pulling starters after two innings, Jesse Chavez made his spring debut as he returned to the Cubs. Looking to return to the 2018 form that saw him become a fan favorite in Chicago, Chavez was roughed up a bit, allowing a solo shot to Luis Liberto in the third to get the Padres on the board, and then watching Luis Campusano take him deep again in the fourth to put the Padres in front 2-1.

Looking to bounce back, it was the Cubs turn to take their swings against the San Diego bullpen as Junior Guerra was called on to pitch. After homering in his first at-bat, Rivas followed that with a single putting a runner on base for the Cubs. Two batters later saw Sergio Alcantara get clipped by a pitch and the Cubs had the tying run on base with one down. One batter later, the top prospect Brennen Davis stepped into the box as he showed his raw power with an opposite-field shot, putting the Cubs in front 4-2.

Rosario was the next man to take the mound for the Cubs, and much like Chavez endured a rough outing. If the Cubs top prospect can homer, why not one-up them as the Padres top prospect in CJ Abrams answered that homer with one of his own to pull the Padres even once again 4-4. Fortunately for Chicago, they were able to keep the Padres offense at bay the rest of the way as their pitching settled in to give the offense a chance.

Starting with Michael Rucker, the Cubs used three pitchers over the final four innings, with Ben Leeper and Kevin McCarthy also seeing action. Leeper is a name to watch this season as the hard-throwing righty put on quite a show in 2021. Not only was his ERA a 1.37, but his 13BB/53K ratio shows that he has back of the bullpen stuff. Look for him to start the season in AAA, but his name is on the Cubs radar at some point this season.

Another player to keep an eye on this season could be Jared Young. Known as an average guy opposed to power, Young showed everyone he has that power-hitting ability on Saturday. With the game still tied 4-4 in the sixth, Young stood in there against left-hander Daniel Camarena and launched it over the right-field fence for the 5-4 Cubs lead.

That run proved to be the difference. Young also added a long double in his next at-bat, showing what a high average approach can do.

When it comes to McCarthy, he is one of those roster fringe guys competing for an MLB spot. The eighth inning was a bit shaky for him as a Kevin Made error helped attribute to that. Made would make up for it later in the inning with an excellent play, as did Chase Strumpf with a diving stop getting McCarthy out of the eighth unharmed.

McCarthey then came out in the ninth inning to shut the door as the Cubs hung on for the 5-4 win.