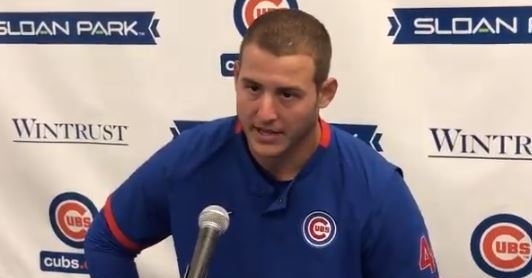 The Coronavirus news is everywhere on the news as health officials try to figure out how to curtail the outbreak overseas and now over here in the United States.

Sports are secondary to health issues as different professional leagues are contemplating postponing games or playing in front of no fans for a time being.

"It's strange as you see the Japanese League and the Korean League postpone their seasons," he said to the media Tuesday. "I think as it continues to pick up steam as a virus here in the states, I'm sure you are going to see more precautions. As far as I'm living, you can't live scared. Just continue to wash my hands and take the precautions because I am going to still live my life."

Rizzo added that he doesn't want to play the games in an empty stadium because "we play for the fans."

"I would definitely fight against that," he said. "Just because we play for the fans. We are employed because of fans and everything they bring for us, the energy. I know we would still be able to put on a show and play, but the energy they bring particularly at Wrigley Field is really an advantage."

Anthony Rizzo said he would 'fight' playing in empty stadiums but understands the sensitivity of the situation.

Rizzo said he will take precautions but “you can’t live scared” pic.twitter.com/kFIhzALD8Q