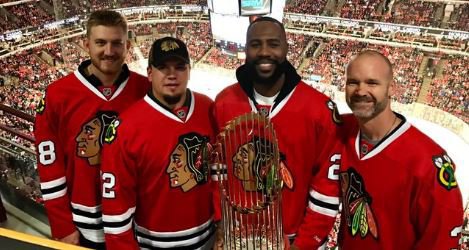 The Chicago Cubs were honored at the Chicago Blackhawks game on Sunday night. Cubs players Kyle Schwarber, Mike Montgomery, David Ross and Jason Heyward were in Blackhawks jerseys while waving the 'W' flag.

The United Center went crazy with applause when the players were announced with the World Series trophy. It was actually Kyle Schwarber's first Blackhawks game ever. What a memorable first game for him as he had his Blackhawks jersey on with his teammates.

Check out this sweet photo of the players hanging out at the game with the World Series Trophy.

Big thanks to @NHLBlackhawks for the experience at my first game! National anthem and game was ??#OneCity pic.twitter.com/KG86aQLakR