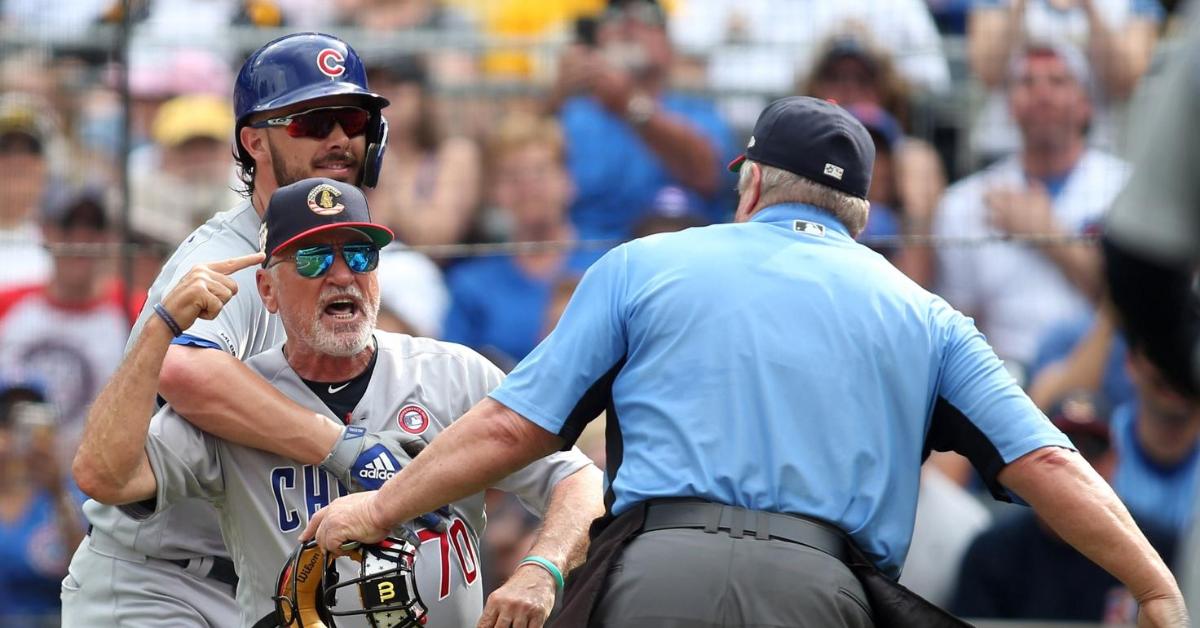 PITTSBURGH — A theme of this week's 4-game set at PNC Park between the Chicago Cubs and the Pittsburgh Pirates was high, inside pitching from the Pirates' pitching staff. Evidently, the pitching approach irked the Cubs to a point that it boiled over into Cubs manager Joe Maddon getting ejected for shouting at home-plate umpire Joe West and Pirates manager Clint Hurdle about it from the dugout in the series finale on Thursday. Maddon then had to be held back by West and Cubs slugger Kris Bryant as he attempted to confront Hurdle.

The at-bat that caused Maddon to lose his cool was shortstop Javier Baez's plate appearance in the top of the fourth. Baez complained to West during the course of the at-bat about the pitches thrown near his head, and the ensuing 3-1 pitch zoomed near Baez and ricocheted off the knob of his bat, which led to Maddon erupting. Even after Maddon was thrown out, the questionable pitches continued, with Pirates reliever Clay Holmes drilling Cubs third baseman David Bote in the helmet with a pitch that knocked Bote to the ground in the top of the fifth.

While none of the beanings or close calls that took place in the series seemed intentional, the Pirates' pitchers were clearly heavily relying on pitches thrown up and in, which is why Maddon blamed Hurdle for the risky tactic. Bryant and Cubs catcher Willson Contreras echoed Maddon's sentiments when speaking with the media following Thursday's game, as they called out the Pirates for their dangerous pitching approach. Bryant and Contreras, who are both right-handed batters, discussed the abundance of high, inside pitches that right-handers Baez and Bote had to face throughout the series, with Bryant pointing out that pitches being thrown up and in have become excessive in today's game.

"I see it all the time," Bryant said. "I get hit all the time. If you want to pitch up, just pitch up. Don't go in. Nobody should be getting hit in the head."

Contreras provided a catcher's perspective when discussing the issue. The backstop essentially claimed that it is the responsibility of the catcher to know which pitchers are capable of regularly hitting their targets on high, inside pitches and which pitchers very well might miss their targets and hit opposing batters in the head.

"If you know your pitches, then you've got to know who you have on the mound," Contreras said. "So if he can go there, you go, but if he can't, then, just don't do it."

Contreras: “There were too many times (the Pirates) went in on Baez” pic.twitter.com/awWm7QiYay

The Pirates have earned the reputation of a team that relies on pitches thrown up and in, which has drawn the ire of Maddon and other managers from around the league. Maddon hinted at bad blood potentially boiling over into next week's series between the Cubs and the Pirates at Wrigley Field by stating that, although the Pirates have several great guys on their pitching staff, pitching like that will make the Cubs' hitters not like the Pirates' pitchers very much. Bryant said something similar in his postgame remarks, as he told the press that, regardless of the intent of the pitches thrown up and in, facing pitches that routinely sail near the noggin is not fun for any batter.

"I don't think it was on purpose or anything like that," Bryant said. "It's just frustrating when balls keep going right in front of your face."

Kris Bryant: “nobody should be getting hit on the head” pic.twitter.com/2LKysqvH4x