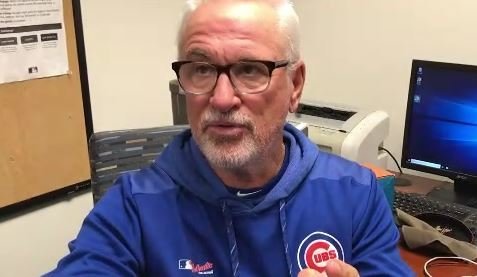 The Chicago Cubs fell 13-10 to the Milwaukee Brewers on Friday night to register their six straight loss and hold a 1-6 record to start the season.

Cubs manager Joe Maddon spoke with the media following Friday's loss and said that he has dealt with similar slow starts before.

"I've actually been 1-7 and made it to the playoffs. I've been with a team that was 18 games under and caught back up to .500. I've been in different situations. It's never fun, but I really like the way our guys are going through this moment right now.

Maddon broke out a famous motivational line by Winston Churchhill about war to describe the six-game losing streak.

"They are doing it the right way if there is such a thing and Winston Churchill once said when you're going through hell just keep on going so; I don't wanna minimize war, just talking in a baseball sense," he said. "You just keep going, get back in the huddle the next day and play the game, and that's what our guys have been doing, and I appreciate that."

Joe Maddon said he didn't expect any moves before tomorrow but didn't rule it out.

The Cubs were 57-11 when collecting 10+ hits last season, 2nd-best winning pct in MLB; so far this season, they're 1-3 in such games. (@ESPNStatsInfo)