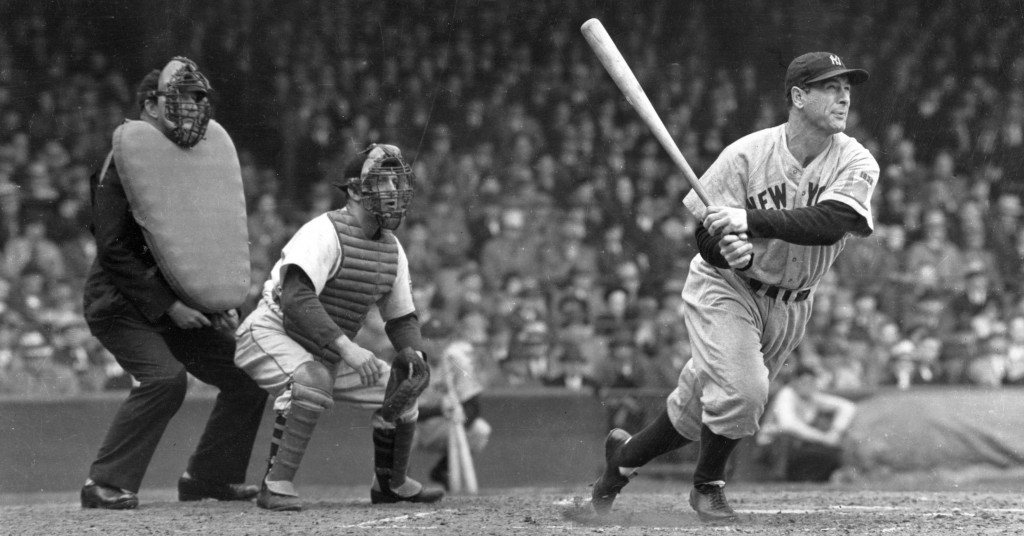 Major League Baseball today announced the inaugural “Lou Gehrig Day,” which will be celebrated throughout the League during the 2021 Championship Season on Wednesday, June 2nd. Henceforth on this date, Gehrig will join fellow Baseball Legends Jackie Robinson and Roberto Clemente as the only players whose legacies are celebrated annually with dedicated, league-wide days.

June 2nd was specifically chosen as the date for Lou Gehrig Day as it marks when Gehrig became the Yankees starting first baseman, thus cementing the start of his incredible streak of consecutive games played, as well as the day he passed from complications of Amyotrophic Lateral Sclerosis (ALS), otherwise known as Lou Gehrig’s disease. The focus of Lou Gehrig Day will be on three pillars: (1) remembering the legacy of Gehrig and all those lost to the disease that bears his name; (2) raising awareness and funds for research of ALS; and (3) celebrating the groups and individuals who have led the pursuit for cures. This special occasion follows a campaign led by the “Lou Gehrig Day Committee” (www.lg4day.com), which is comprised of individuals, family and friends affected by ALS, as well as organizations leading the way on awareness and fundraising for the movement to end the disease.

Commissioner of Baseball Robert D. Manfred, Jr. said: “Major League Baseball is thrilled to celebrate the legacy of Lou Gehrig, whose humility and courage continue to inspire our society. While ALS has been closely identified with our game since Lou’s legendary career, the pressing need to find cures remains. We look forward to honoring all the individuals and families, in baseball and beyond, who have been affected by ALS and hope Lou Gehrig Day advances efforts to end this disease.”

Stephen Piscotty, Oakland Athletics outfielder, said: “Lou Gehrig Day will honor Lou’s accomplishments on the field, but also help millions understand this devastating disease that has claimed far too many of us, including my mother. Before she passed, she did everything she could to raise awareness of ALS and I know she’d be thrilled that Major League Baseball will now shine a spotlight on Lou Gehrig and ALS every season. Hopefully this awareness will help lead to a cure.”

Sam Hilliard, Colorado Rockies outfielder, said: “Lou Gehrig was a legend on the field, but also because of the grace with which he handled his diagnosis of ALS. My father is currently fighting ALS and he continues to inspire me and all those around him. Lou Gehrig Day will be a celebration of all those living with ALS and their loved ones, but also a call to action to help us find a cure for ALS.”

Jacob Nottingham, Milwaukee Brewers catcher, said: “ALS has touched my life negatively in so many ways. Six members of my family were taken much too early from this dreaded disease. I stand with other families across the globe in praying for a cure. Together, we can fight this and ultimately find that cure.”

On Lou Gehrig Day, each home Club will host ceremonies and display “4-ALS” logos in ballparks, commemorating Gehrig’s uniform number “4.” Additionally, all players, managers and coaches will wear a special “Lou Gehrig Day” patch on uniforms while red “4-ALS” wristbands will be available to be worn in-game. Clubs with an off-day on June 2nd will observe Lou Gehrig Day on June 3rd. Additional ceremonial and activation details around Lou Gehrig Day, which will be organized in part with the Lou Gehrig Day Committee, will be announced at a later date.

Baseball has had a long-standing commitment to supporting the movement to end ALS, including commemorations on July 4th – the anniversary of Gehrig’s famous “Luckiest Man Alive” retirement speech – as well as annual in-ballpark recognitions throughout the month of August, which is ALS Awareness Month.

In 2017, MLB supported the ALS Association’s “Home Health Initiative” through the MLB Fights ALS campaign, which was a league-wide fundraising effort in early August of that year. Beginning with an initial contribution from

In 2014, MLB, its Clubs and its players supported the wave of millions of dollars raised through the ALS Ice Bucket Challenge, which led to new discoveries that have advanced the search for cures.

In 2009, MLB formed the initial “4-ALS” charitable campaign to raise funds for four ALS organizations and to commemorate the 70th anniversary of Gehrig’s retirement speech.

Historically, MLB and Clubs have supported several ALS-focused organizations in raising funds and general awareness of the disease.

ALS is a fatal neurodegenerative disease that can strike anyone at any time. People with ALS lose the ability to control their muscles, which affects their ability to walk, talk, eat, and eventually breathe. There are an estimated 20,000-30,000 people living with ALS. There is no significant treatment to extend life or cure ALS, but there are currently several potential treatments in late-stage clinical trials.

Affectionately known as the “Iron Horse,” Lou Gehrig is one of the greatest players in all of baseball history. On June 2, 1925, Gehrig became the Yankees starting first baseman on his way to his legendary streak of 2,130 consecutive games played, which ended on April 30, 1939 and would stand for more than 60 years. Gehrig’s career is highlighted with two American League Most Valuable Player (MVP) Awards, a Triple Crown, six World Series championships, seven All-Star appearances and the 1934 batting title. His farewell speech to the baseball world on July 4, 1939, amid the struggles of a debilitating disease, displayed the humanity and grace that has become synonymous with his legacy. He was elected to the National Baseball Hall of Fame in December 1939. Gehrig succumbed to ALS on June 2, 1941.