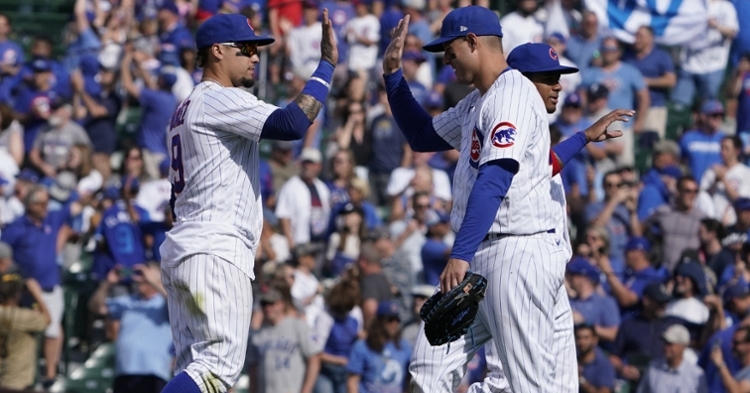 CHICAGO — With just over a week remaining before the trade deadline, the Chicago Cubs' front office is reportedly fielding plenty of calls from teams interested in acquiring some of the North Siders' on-field talent. The Cubs are expected to be sellers in the buildup to the July 30 trade deadline, and several big names could be on the move away from Wrigley Field.

670 The Score writer Bruce Levine reported on Thursday that the Cubs' trade discussions seem to be headed "down to the wire." Cubs president of baseball operations Jed Hoyer is likely to pull the trigger in dealing third baseman Kris Bryant and closer Craig Kimbrel, but there is far less certainty regarding what will be done with shortstop Javier Baez and first baseman Anthony Rizzo.

Levine revealed that most teams inquiring about trades with the Cubs are interested in Bryant, Kimbrel or another relief pitcher. In addition to Kimbrel, Andrew Chafin and Ryan Tepera are probably the other Cubs relievers generating attention on the trade market. Together, the three hurlers have formed a three-headed monster out of the bullpen this season.

The most notable revelation from Levine's article centers upon the interest — or lack thereof — that Baez and Rizzo are drawing. According to Levine, Cubs management has engaged in far fewer trade talks surrounding "El Mago" and "Big Rizz" than the aforementioned four, and Levine opined that their impending free agent status is why Baez and Rizzo are not viewed as hot commodities.

Bryant and Tepera are also set to become free agents at season's end, but Bryant is in the midst of an All-Star season and is assuredly viewed as a game-changer for any team currently in the playoff hunt. Not to mention, Bryant's defensive versatility increases his value. As for Tepera, a reliable late-inning reliever is always an attractive target at the deadline.

Baez and Rizzo, on the other hand, are experiencing somewhat lackluster offensive seasons. Although they are both phenomenal defenders, Baez has struck out far too often this year, while Rizzo has struggled to string together any kind of consistency at the plate for most of the season. Therefore, teams may not be as eager to give up prospects in return for free-agents-to-be when the risk-reward does not tilt in their favor.

There is still a chance that Baez and Rizzo could agree to contract extensions with the Cubs prior to the trade deadline, but they could also find themselves playing out the rest of the season as lame ducks on a Cubs team entering into a rebuilding phase. Bryant and Kimbrel are much likelier to find themselves playing for new teams by the end of July, but, as indicated by Levine's reporting, Hoyer might wait as long as possible before trading them away.

When the dust settles after the trade deadline arrives at 3 p.m. CDT next Friday, the Cubs' roster is almost certain to be different than it is now. The ultimate question is just how different it will be.