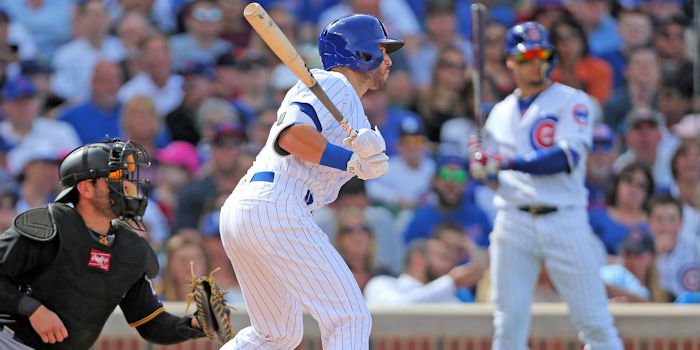 CHICAGO – The Chicago Cubs today traded infielder Tommy La Stella to the Los Angeles Angels for a player to be named or a cash consideration.

La Stella, who turns 30 in January, spent the last four seasons with Chicago and batted .273 (139-for-509) with 34 doubles, nine homers and 63 RBI in 303 games in a Cubs uniform. A 2016 World Champion, La Stella departs as the club’s all-time single-season pinch-hit leader as he tallied 24 hits in that role in 2018. La Stella was acquired by the Cubs from the Atlanta Braves for pitcher Arodys Vizcaino on November 16, 2014.

Thank you to World Series Champion Tommy La Stella for his contributions to the #Cubs over the last four seasons! pic.twitter.com/WMvLNKQPiL

La Stella is arbitration eligible projected (by https://t.co/jGEpxKxHim) for a $1.2 million deal in 2019. Trade comes one day after Cubs acquire IF Ronald Torreyes ($900K in projected arb salary). https://t.co/4U4rU4JXi4

Tommy La Stella will take his pinch-hitting duties to South Cali, as Cubs trade him to the Angels for a PTBNL or cash.

The Torreyes move makes even more sense now, though Cubs will need to add a left-handed bat off the bench.

Wanna wish Tommy La Stella the best with the Angels. Sweet, kind human. Always greeted everybody with a smile. And the dude can RAKE.

Tommy La Stella traded to Angels for player to be named later or cash consideration. 40-man at 39.