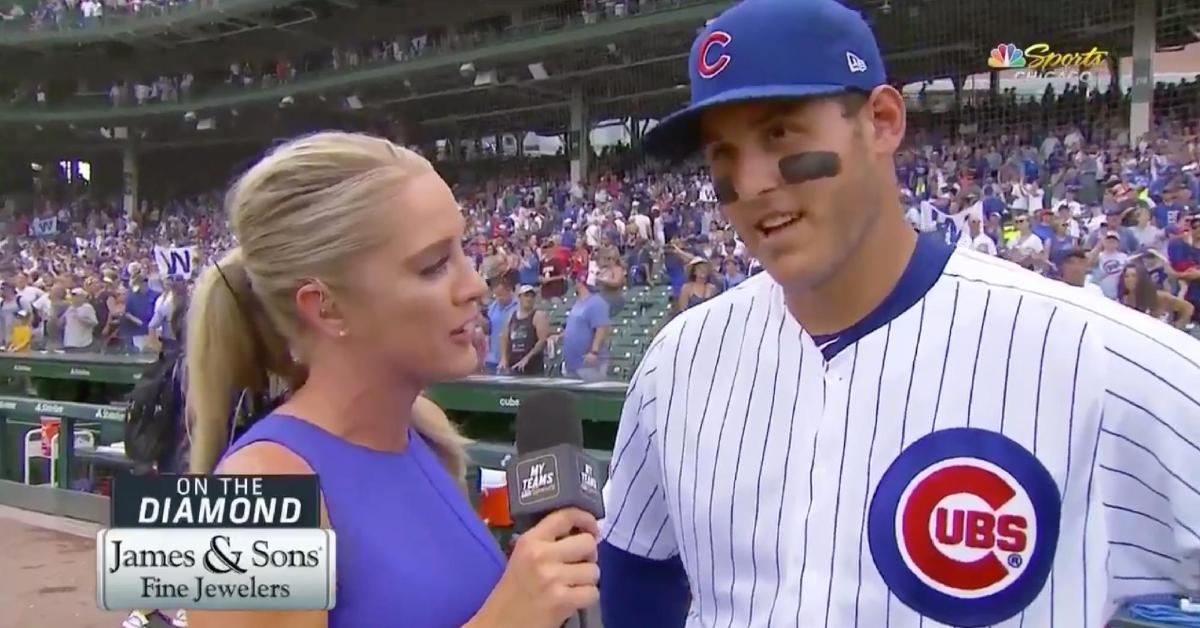 Even as a Florida native, Anthony Rizzo had to admit that the heat at Wrigley Field was rather excessive on Friday.

CHICAGO — In 2011, Anthony Rizzo played his rookie MLB season as a member of the San Diego Padres. On Friday afternoon, the Chicago Cubs' hard-hitting first baseman showed up the club that traded him to the Cubs by smacking a go-ahead grand slam. Rizzo went 2-for-3 with one walk in the 6-5 Cubs win at Wrigley Field, and he tabbed four RBI thanks to one swing of his bat.

Not only did the third-inning grand slam put the Cubs up 4-3, but it also served as Rizzo's first home run since June 15. When speaking with NBC Sports Chicago reporter Kelly Crull following the game, Rizzo said that his fourth career grand slam, which was also Rizzo's 20th long ball of the season, provided him with a great feeling.

"It felt good," Rizzo said of the grand slam. "It's been a while. Grand slams always feel great."

Rizzo also discussed the Cubs' 1-run eighth inning, which was highlighted by a pair of Padres errors. First, a throwing error on a potential double-play ball resulted in Rizzo reaching third and Cubs second baseman Addison Russell reaching second. Then, on a play that saw Rizzo thrown out on a force play at the plate, a botched catch at first base led to Russell motoring home and giving the Cubs a 6-5 lead.

"You've got two errors in the inning, so that's definitely weird," Rizzo said while recollecting the bottom of the eighth. "I'm happy we scored. That's good hustle on Addy's part."

Additionally, Crull commented to Rizzo about the blazing heat at the ballpark, as the temperature remained above 90 degrees throughout the contest. Rizzo is a Florida native, and he had previously boasted to Crull that the heat would be no problem for him because he grew up playing in the heat. However, even Rizzo had to admit that Friday's scorcher was a bit extreme for a game played in the Windy City. In the end, though, the Cubs beat the heat while also beating the Padres.

"(If) we play clean baseball, we're hard to beat"@Kelly_Crull caught up with Anthony Rizzo on the diamond after a Cubs W! (@JandSJewelers) pic.twitter.com/VqgIWbTjxz