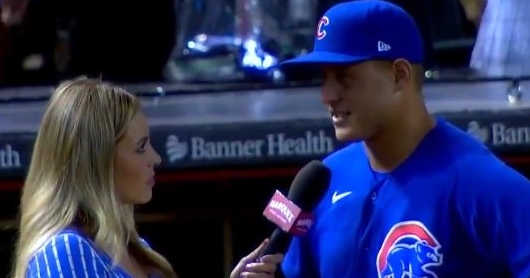 It was his 11th homer of the season and an important one as it moved Rizzo up to No. 6 on the Cubs all-time list.

Rizzo spoke to Marquee Sports Network after the win and is very proud of his accomplishment.

"I did not know that," Rizzo told reporter Taylor McGregor. "That is amazing. It is a great franchise and a lot of history here. To be on that, it is incredible."

Rizzo is happy to be associated with such a great group of standout players.

"There have been a lot of really good, historic players to play for this franchise. Just to be up there is really special.

With his 11th home run of the season, @ARizzo44 moves to No. 6 on the #Cubs all-time list alongside Aramis Ramírez. pic.twitter.com/XU6lyGRQCR