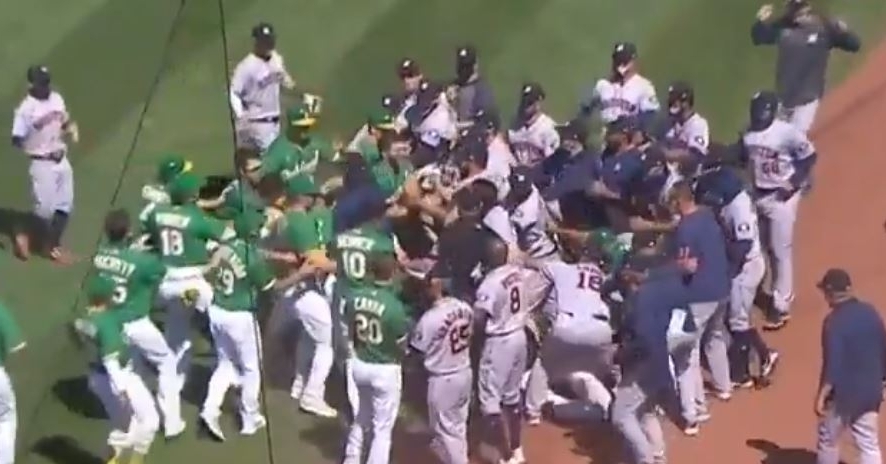 Both dugouts emptied after an HBP in the Astros-Athletics game on Sunday.

OAKLAND, Calif. — A benches-clearing fracas involving the Oakland Athletics and the Houston Astros assuredly made every MLB bigwig cringe on Sunday. This season, due to social distancing protocols, melees of any kind are severely frowned upon, but a hit by pitch sparked a confrontation at the Oakland Coliseum.

Surprisingly, despite the prevalence of Astros players being targeted with pitches this year because of the infamous cheating scandal, an A's batter getting plunked incited the incident. With the A's leading the Astros 6-2 in the bottom of the seventh, Ramon Laureano was hit on the back with a pitch.

Laureano's ire was directed not at the pitcher who beaned him but at Astros hitting coach Alex Cintron, who barked at Laureano from the dugout. Laureano charged at Cintron and was subsequently tackled by Astros players, resulting in both benches emptying. Now, a waiting game regarding punishments for the incident and possible COVID-19 positive tests will commence.

Laureano charges the Astros dugout and the brawl breaks out pic.twitter.com/CQ2K8kFnlb