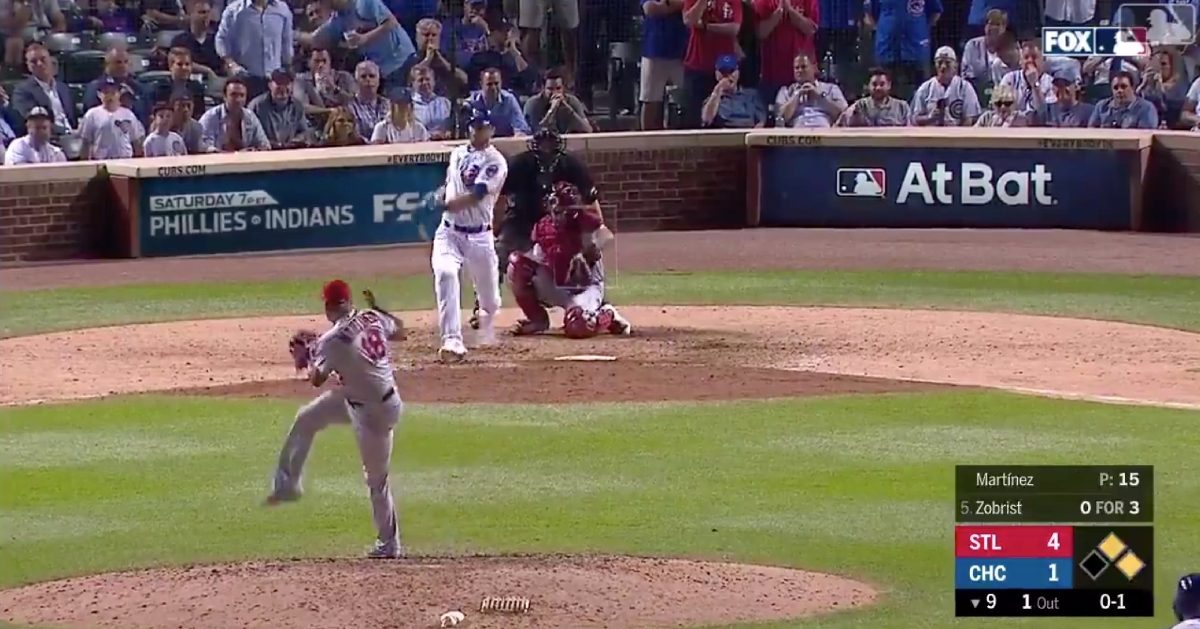 Thanks in large part to an RBI double by Ben Zobrist, the Chicago Cubs plated three runs in the bottom of the ninth on Thursday.

CHICAGO — With the game on the line, the Chicago Cubs did what they had to in the bottom of the ninth on Thursday by plating three runs and tying the St. Louis Cardinals up at 4-4. The 3-run ninth inning at Wrigley Field forced extra innings.

The Cardinals led 4-1 entering the bottom of the ninth, but Cardinals closer Carlos Martinez walked the leadoff man and then gave up a single. Following a strikeout, Cubs second baseman Ben Zobrist came up clutch with an RBI double that bounded past first base and down the right-field line.

The RBI double pulled the Cubs to within two runs of the Cardinals and resulted in Cubs shortstop Javier Baez, who was cleared by doctors to pinch run earlier in the day, pinch running for Zobrist. Cubs catcher Willson Contreras drove home the second run of the frame with a nubber.

Martinez fielded the slow roller near the third baseline and tossed the ball to the plate. However, the awkward throw was not made in time, and the lead runner scored. After a pitching change, Cubs center fielder Jason Heyward batted a hard-hit grounder between first and second that scored Baez, who wore a protective mitt on his left hand in order to protect his injured left thumb.

The @Cubs score 3 in the 9th, and we have a brand new ball game! pic.twitter.com/rzKPSkwWA6

Cardinals second baseman Tommy Edman made a diving stop of the burner hit by Heyward but was able to record only the out at first. Cardinals reliever Andrew Miller enabled St. Louis to escape the inning once he replaced Martinez on the mound. Regardless, the Cubs came alive at the plate in the bottom of the ninth and stayed alive because of it.