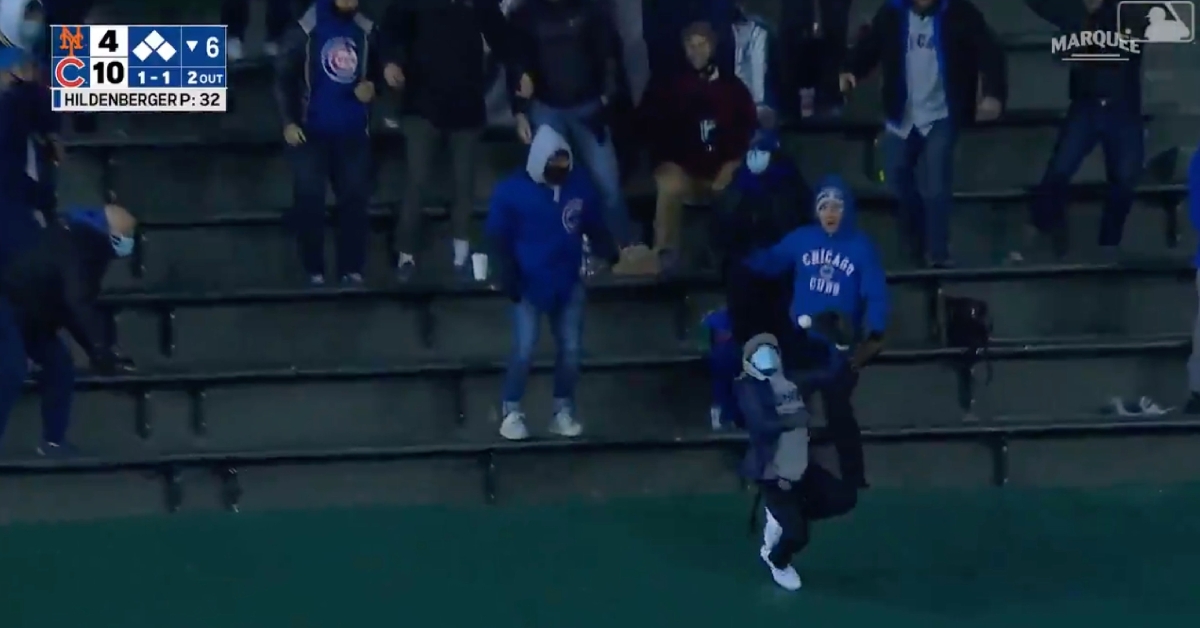 Attempting to catch a grand slam hit by Javier Baez led to this fan going for a slide.

CHICAGO — In the Chicago Cubs' 16-4 beatdown of the New York Mets on Wednesday, Cubs shortstop Javier Baez smacked a 395-foot grand slam out to left at Wrigley Field. A Cubs fan went all out in nabbing the baseball hit into the night sky by Javy and took a tumble in the process.

The sixth-inning dinger put the Cubs ahead 14-4 and was the lone home run hit by the Cubs in the romp. In fact, the Mets, who hit two long balls, went yard more than the team that drubbed them by 12 runs. As for the young man who came up with the sole Chicago round-tripper of the evening, Baez's fifth homer of the season, he fell victim to a temporarily placed tarp in the outfield bleachers while attempting to glove the ball.

With a tarp blocking off the outfield seats closest to the playing field due to capacity limitations in the time of COVID-19, the fan cascaded down it like a water slide after catching the home run ball and losing his balance in the stands. An onlooking security guard was unable to break his fall, but, thankfully, the kid did not appear to be injured. While being the center of attention in a blooper video is never fun, coming away with a prized souvenir makes for a fair tradeoff.

Javy Baez just destroyed this grand slam and luckily the camera cut away before the fan that caught the ball undoubtedly broke every bone in their face. pic.twitter.com/kYgmKlnEap

HARDHATS ARE REQUIRED IN THE BLEACHERS pic.twitter.com/05j8Ee1vXk