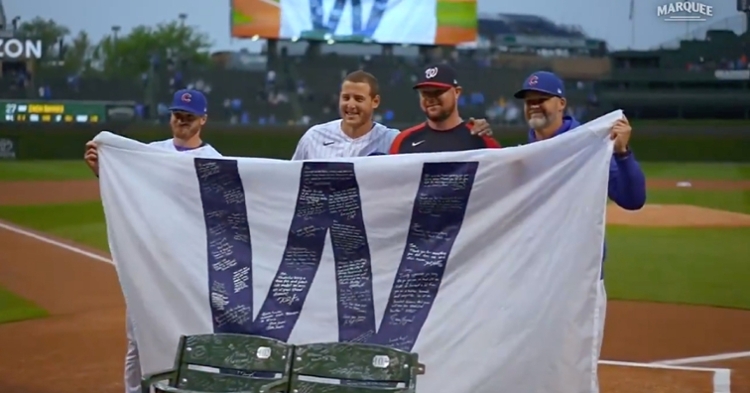 Jon Lester received heartfelt gifts from the Cubs in honor of his decorated tenure with the club.

CHICAGO — Commemorating former Chicago Cubs ace Jon Lester's return to Wrigley Field, the Cubs presented Lester with heartfelt gifts on Tuesday. Lester started in Monday's series opener between the North Siders and Washington Nationals, so the Cubs waited until Tuesday to honor Lester prior to the game.

Cubs center fielder Ian Happ, Cubs first baseman Anthony Rizzo and Cubs manager David Ross presented Lester with a "W" flag — identical to the one that flies at the Friendly Confines following wins — and a pair of Wrigley Field seats, all of which were bearing signatures and messages from members of the Cubs organization.

Fittingly, a country music song blared over the loudspeaker while Lester, a diehard country music fan, was honored at home plate. "Big Jon" shared hugs with close pals Happ, Rizzo, Ross and other Cubs employees who came onto the field for the ceremony. He then posed for a few photos with them before returning to the visiting dugout. The touching moment was a great way for the Cubs to honor one of the most impactful pitchers in franchise history.

We prefer our Ws curly, but this was a pretty awesome gesture.#CubTogether // #NATITUDE pic.twitter.com/qWk5qGLfPo

Cubs gift Lester a set of seats from Wrigley and a giant W flag with messages scrawled on it.

Ross, Rizzo and Happ out there to present Lester with the gifts. pic.twitter.com/Q4FetaxaK4