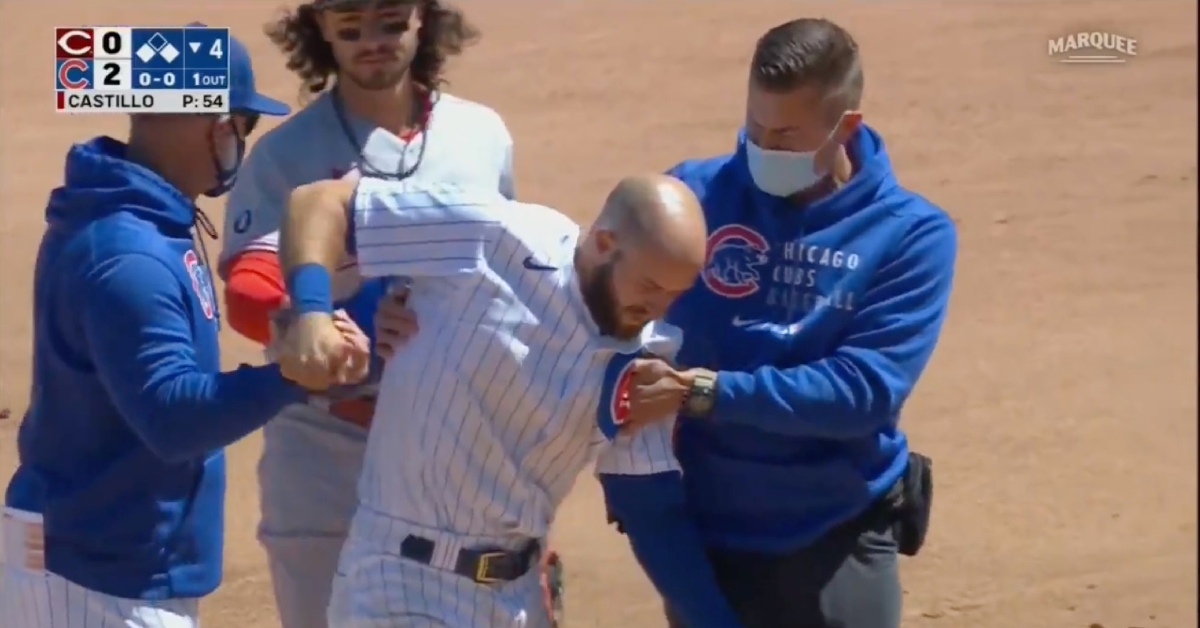 David Bote walked off the field in obvious pain after suffering an apparent left shoulder injury on a slide.

CHICAGO – The injuries just never seem to stop for the Chicago Cubs these days. Third baseman David Bote became the latest Cub to suffer an injury when he left Saturday's game versus the Cincinnati Reds with what appeared to be a serious left shoulder injury.

Bote might have dislocated or separated his left shoulder when reaching back toward second base after sliding past the bag. Adding insult to injury, a successful Reds challenge ruled that Bote had interfered with shortstop Eugenio Suarez on the play, resulting in a 3-6-1 double play in the bottom of the fourth at Wrigley Field. Suarez stepped on second base for the first out, and starter Luis Castillo recorded the putout at first base for the second out. The Cubs led 2-0 at the time.

Second baseman Eric Sogard initially beat the throw to first base but was called out due to Bote's slide interference. Sogard actually collided with first baseman Alex Blandino, who fielded Sogard's grounder and threw to Suarez at second base, on the play but avoided injury. Right fielder Rafael Ortega reached third base on the play but was forced to head back to second base because of the interference ruling.

In an effort to avoid having interference called, Bote attempted to remain engaged with the bag but injured himself in the process. The replay official still ruled that Bote reaching out to touch Suarez's leg on his feet-first slide constituted interference. After showing obvious signs of pain while lying on the ground, Bote was helped off the field while favoring his left shoulder. Patrick Wisdom replaced him in the lineup.

Yesterday's offensive hero David Bote apparently injures his left shoulder sliding into 2nd base and is removed from the ballgame. Adding insult, he's called for interference and the runner at 1st is out, as well.@Cubs #GoCubsGo pic.twitter.com/dGtq6dYrPS

UPDATE: The Cubs later confirmed that Bote had suffered a left shoulder injury.

Per @Cubs, David Bote was removed from the game due to a left shoulder injury. He is undergoing further evaluation.