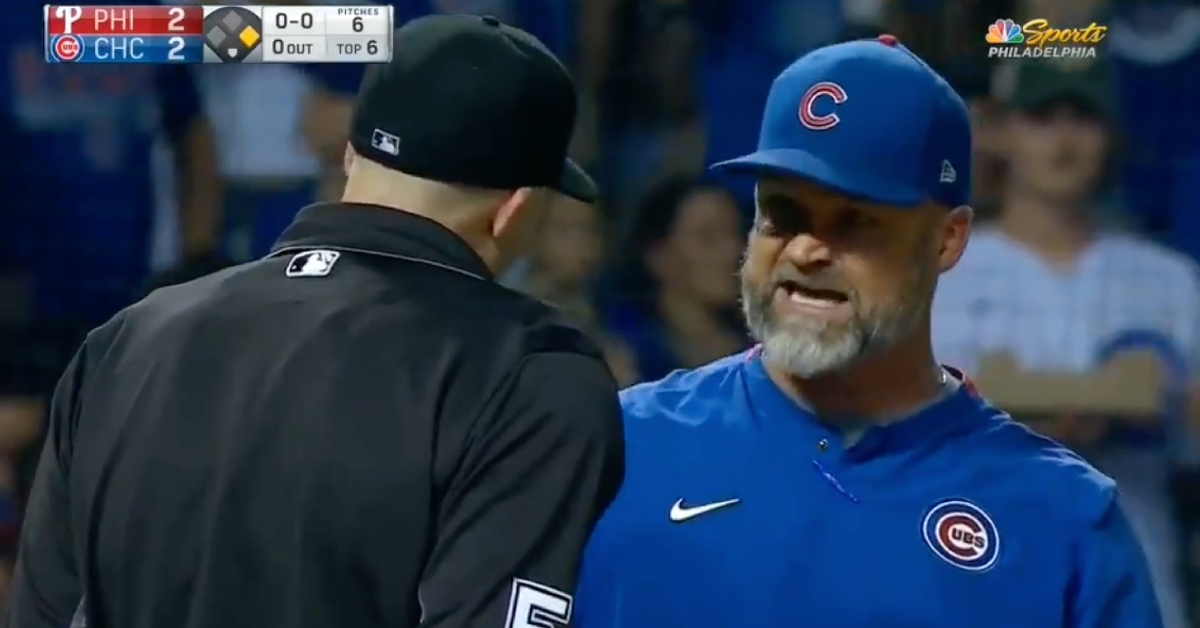 David Ross was irked after Bryce Harper drew a walk on a borderline pitch, and Nic Lentz did not hesitate to eject the second-year skipper.

CHICAGO — Home plate umpire Nic Lentz did not display much patience when Chicago Cubs manager David Ross argued a borderline pitch in the top of the sixth at Wrigley Field on Monday night. Philadelphia Phillies right fielder Bryce Harper drew a leadoff walk on a full count, and Ross was ejected for voicing his displeasure from the dugout.

Ball four to Harper was a 97-mph four-seamer from reliever Rex Brothers that was a bit low. However, Ross had a problem with Lentz' ruling, as he might have thought that Harper talked Lentz into the call after Harper was upset with the strike call on the previous pitch. A borderline pitch that caught the outside corner was called a strike, making the count full, and Harper was not pleased.

While Harper did not get sent to the showers for disagreeing with Lentz, Ross was not so fortunate. Once he was tossed, Ross stormed onto the field and gave Lentz a piece of his mind before heading to the clubhouse. Crew chief Joe West, who served as the first base umpire on the evening, held Ross back as he chewed out Lentz. Meanwhile, fans in attendance cheered on Ross' tirade.

The whole interaction as David Ross got ejected for arguing balls and strikes on a full-count walk to Bryce Harper pic.twitter.com/iBLj9EGonP

Bench coach Andy Green took over as the Cubs' acting manager. Brothers gave up an ensuing RBI double to left fielder Andrew McCutchen, with Harper scoring from first base on the two-bagger, which was hit into the left field corner. Harper scoring put the Phillies up 3-2, marking their first lead of the contest.