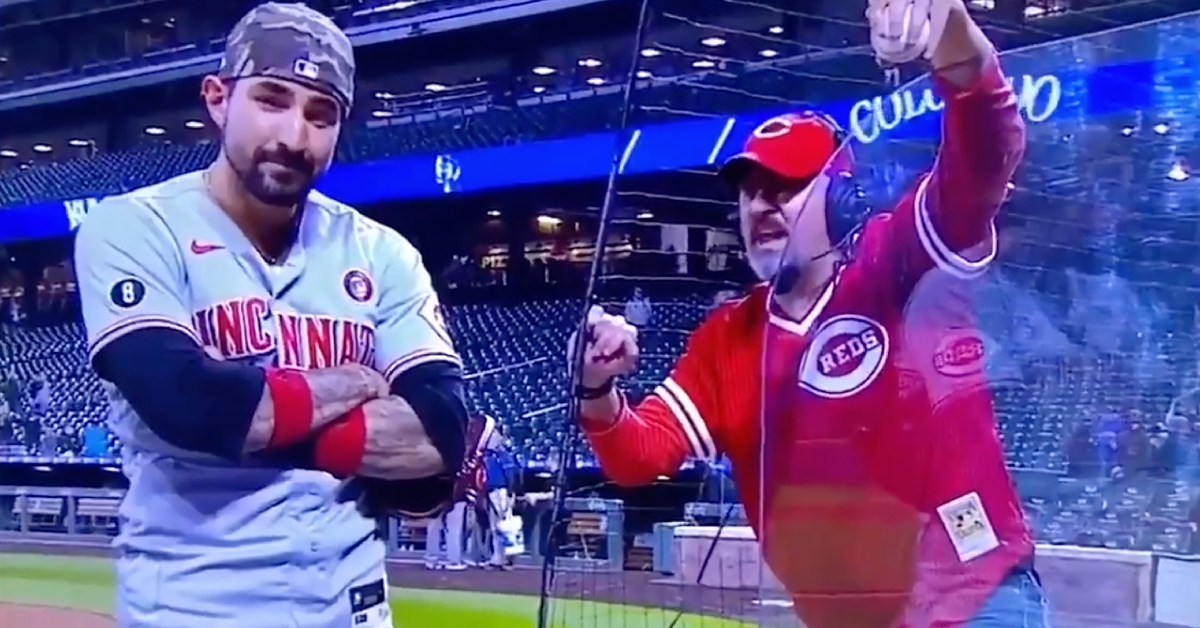 Nicholas Castellanos was hilariously indifferent about the fan's surprising admission being made on live television.

DENVER — A hilarious, viral moment came about by a fan inspiring former Chicago Cubs right fielder Nicholas Castellanos to go yard by telling him to picture the face of oft-maligned MLB commissioner Rob Manfred on the baseball. With the Cincinnati Reds, Castellanos' current team, taking on the Colorado Rockies at Coors Field on Saturday, Castellanos hit a 405-foot two-run home run that tied the contest at 2-2 in the top of the third.

The Reds went on to beat the Rockies 6-5 in 12 innings, and Castellanos was 3-for-5 with three RBIs in the game. While that made for a solid performance, it was overshadowed by Castellanos' revelatory postgame interview, which featured a guest appearance by none other than the aforementioned fan. Castellanos was more than happy to grant the Reds supporter, who inspired him to homer, headset privileges while being interviewed live on Bally Sports Ohio.

Nick Castellanos should be back in Colorado in a couple months. ?? pic.twitter.com/JMlfAV16Po

The fan proceeded to reveal that he shouted the line about envisioning Manfred's face not long after Castellanos dug in at the plate in the third frame, leading to Castellanos taking the very next pitch deep for his 10th dinger of the season. During the broadcast of the game, a clip of Castellanos giving the fan, who was seated close to the field, a fist bump after completing his home run trot was shown, resulting in Bally Sports Ohio wanting to hear from the fan on the postgame show.

"I told Nick he should imagine Rob Manfred's face on the baseball."

It is no secret that many MLB players, managers, coaches and fans alike are not particularly fond of Manfred, and Castellanos was not shy about giving the fan credit for inspiring him to crush a pitch upon forming a mental image of Manfred's face. Adding to the hilarity of it all was a totally unfazed Castellanos looking directly into the camera as the fan admitted on live television that Castellanos sent a ball that, in his mind, was emblazoned with the most powerful man in baseball's face into the seats. Perhaps more homer-hungry batters should try that technique.