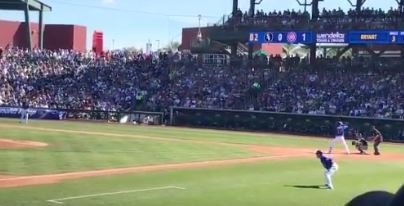 A healthy Kris Bryant is HUGE for the Cubs in 2019.

During Sunday's game against the White Sox in front of a Cactus League record 16,069 fans, Bryant smacked a three-run homer off of Juan Minaya on a 3-2 count for his second homer of the spring.

In the third inning, he had a single to add to his walk and homer totals (3 RBIs) for the game. Bryant appears to be ready to prove his doubters wrong this season.

Check out the home run footage below:

Kris Bryant smacks his second dinger of the spring in 2nd inning vs. White Sox#everybodyin pic.twitter.com/ZJRvEWfhc2