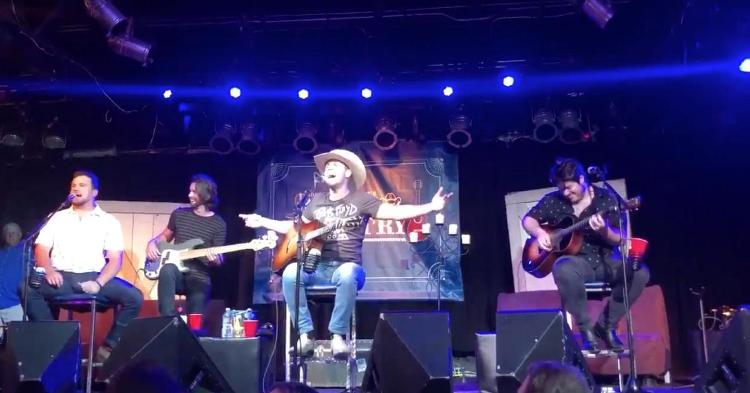 Kyle Schwarber sang along with Dustin Lynch at a fundraising event put on by Jon Lester's charity, NVRQT.

CHICAGO — At the fourth annual NVRQT Goes Country event, which is hosted by Chicago Cubs starting pitcher Jon Lester and his NVRQT charity that raises money to help fund pediatric cancer research, Cubs left fielder Kyle Schwarber showed off his vocal range. Just a few weeks removed from singing "Take Me Out to the Ball Game" at a showing of the musical Miracle, Schwarber sang in front of a live audience yet again on Wednesday night.

Lester, a proud country boy, is known for regularly wearing cowboy hats and cowboy boots and listening to country music, and his annual fundraiser is fittingly country-themed. Country-music star and lifelong Cubs fan Dustin Lynch performed with his band at the get-together, and Schwarber sang along on stage with Lynch during a rendition of "Wagon Wheel." Former Cubs catcher David Ross, a fan favorite, was also in attendance, and he sang along in the crowd with Schwarber to a separate song. This year, the proceedings from the gala added up to nearly $600 thousand, making it both a great time for all involved and a highly success charitable endeavor.