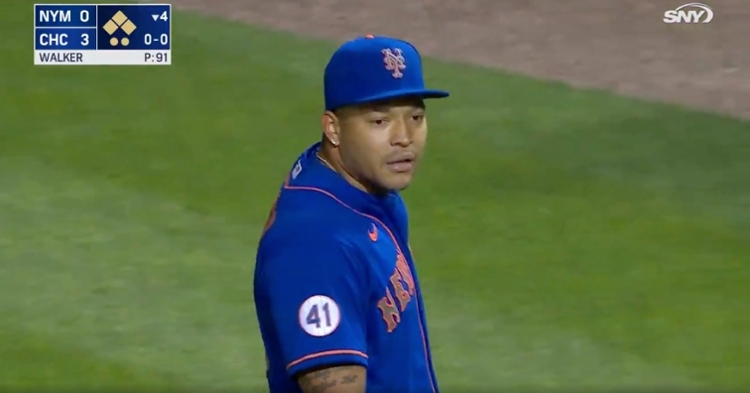 Mets starter Taijuan Walker barked at the home plate umpire while leaving the field and was ejected for it.

CHICAGO — New York Mets starter Taijuan Walker came unglued with two outs in the bottom of the fourth on Tuesday, giving up two straight singles followed by three straight walks. After walking in a run, putting the Chicago Cubs up 3-0 over the Mets at Wrigley Field, Walker was relieved on the mound.

While Walker's night was technically already over, it officially ended once home plate umpire John Libka ejected Walker for arguing balls and strikes with him as he walked off the field. As a result, instead of being able to watch the remainder of the game from the dugout, Walker was sent to the showers by Libka.

After being pulled from the game, Taijuan Walker had some words for home plate umpire John Libka on his way to the dugout and was subsequently ejected pic.twitter.com/RSvuzA9FTj

Walker was not pleased with a ball call that went the Cubs' way with catcher Willson Contreras at the plate. On a full count, Contreras took the borderline pitch, which was correctly called a ball, and was also able to successfully check his swing by stopping himself from going around. The walk of Contreras forced home second baseman Eric Sogard and elicited a pitching change.

Sogard drove home the first of two runs scored in the inning, plating right fielder Jason Heyward with a base knock after Heyward singled with two outs and stole second base using an elusive swim move. Following Sogard's RBI single, pitcher Jake Arrieta and center fielder Ian Happ drew back-to-back walks to load the bases, setting up the Contreras base on balls that ushered Sogard across the plate.

The Mets unsuccessfully challenged Heyward's steal, and Walker fell apart after that. The right-hander seemed upset with the 3-2 call in the Contreras plate appearance but was likely frustrated with some of Libka's other calls in the fourth frame. Walker was probably frustrated with himself most of all, as what had the makings of a quality start abruptly unraveled in the fourth. Robert Gsellman relieved Walker and struck out Anthony Rizzo to end the inning at 3-0.