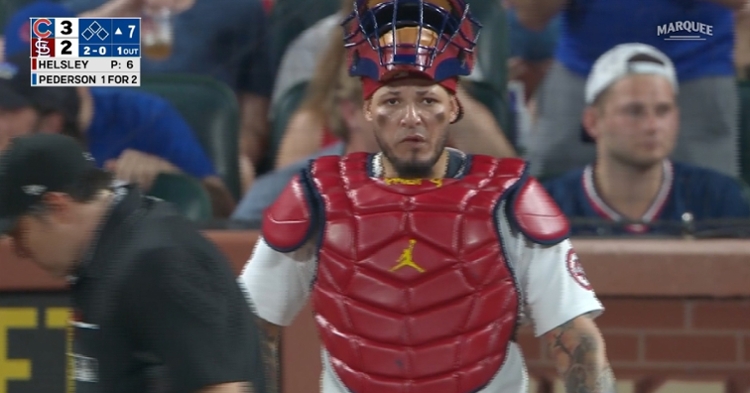 Yadier Molina's off-the-mark throw to third base proved costly for the Cardinals. (Credit: @WatchMarquee on Twitter)

ST. LOUIS – A high throw from St. Louis Cardinals catcher Yadier Molina allowed Chicago Cubs second baseman Nico Hoerner to score from third base on Friday. Molina corralled a wild pitch thrown in the dirt by reliever Ryan Helsley in the top of the seventh and subsequently fired a shaky throw to third baseman Nolan Arenado, who was surprisingly charged with a fielding error on the play.

Hoerner led off the inning with a single off Helsley at Busch Stadium. He then advanced to second base on a sacrifice bunt laid down by starter Kyle Hendricks. After taking off for third base on the wild pitch, Hoerner slid headfirst into the bag and did not initially realize Molina airmailed his throw.

After third-base coach Willie Harris caught Hoerner's attention and sent him home, Hoerner scooted across the plate, putting the Cubs up 3-2 over the Cardinals. The North Siders increased their lead to 4-2 soon afterward, with left fielder Joc Pederson, who walked in the plate appearance featuring the wild pitch, scoring from first base on a hard-hit RBI double, which bounced off the wall in right-center, off the bat of right fielder Kris Bryant.

KB adds to the lead! pic.twitter.com/955J3wWU8r