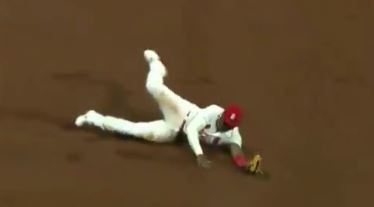 Cardinals outfielder Marcell Ozuna had possibly the blooper of the season even at this early stage of the season.

If you are a Cubs fan, you probably will think the following video is one of the funniest things ever.

During the eighth inning against the Dodgers, Ozuna went up a wall to catch a deep fly ball. However, at the last second, he realized that the ball was going to be several feet in front of him, and he dove flat on his face.

According to Statcast, Ozuna ran 80 feet for the ball when he only needed to cover 52 feet.

Kiki Hernandez ended up with a ground rule double on the play.

The Curb treatment that Marcell Ozuna deserves for this play... pic.twitter.com/espBgqVrfL

The Dodgers bullpen thought it was pretty funny: