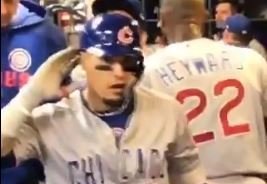 El Mago has fans throughout all the major league ballparks.

Javy Baez smacked a homer to put the Cubs up 5-2 in the sixth inning during Saturday's game against the Brew Crew. It was his fourth homer of the season.

After the homer, fans at Miller Park aka 'Wrigley North' were heard chanting 'JAVY JAVY'.

Baez heard the chants in the dugout in the following video.

El Mago leads off the 6th with a solo shot to give the #Cubs a 5-2 advantage over the Brewers. “Javy” chants break out at Miller Park & he’s lovin it?? pic.twitter.com/50kZAV7aax