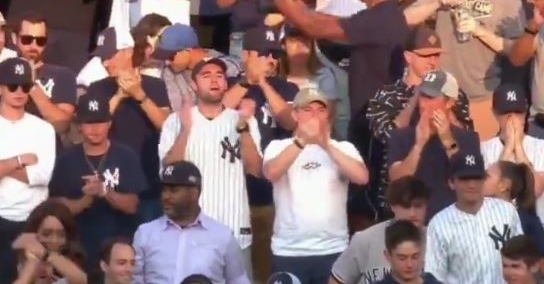 Fans are appreciative as Rizzo has played well early

Former Chicago Cubs first baseman Anthony Rizzo is no longer a Cub since his trade to the New York Yankees.

However, his new fans seem to have really embraced him early on after his sizzling start with two homers in two games.

In his first series with the Yankees, he has a 1.915 OPS, the best all-time for the historic franchise.

On Monday, in the first inning, the crowd chanted Rizzo's name as part of their roll call.

Rizzo acknowledged the crowd with his right hand.

They also gave him a standing ovation before his first at-bat at Yankee Stadium (NOTE: Rizzo's walkup music is the same):

Anthony Rizzo receives a standing ovation in his first at-bat at Yankee stadium as a Yankee.