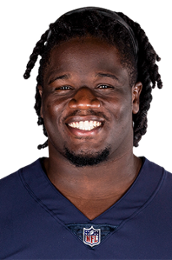 Has 76 career starts at both guard and tackle, including six postseason starts; has four playoff starts at right tackle and two at right guard

Started all 16 games at right tackle as the Seahawks finished fourth in the NFL with 137.5 yards per game on the ground

Started all 15 games played and helped Seattle lead the league in rushing, averaging 160.0 yards per game; started at right tackle 14 games and one at right guard in Week 17