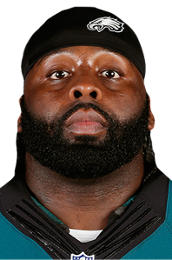 Offensive Line
B I O
CAREER:

Has played in 213 career games with 203 starts, including six postseason starts
With his ninth Pro Bowl selection and seventh as an Eagle in 2016, Peters garnered the second-most Pro Bowl nods in team history behind Chuck Bednarik (eight)
Earned Associated Press All-Pro honors following the 2007, '08, '10, '11, '13 and '14 campaigns
Was named to the first team in 2011 and 2013
Joined Frank "Bucko" Kilroy (1953-55) as the only two offensive linemen in franchise history to earn a Pro Bowl berth in three consecutive years
Since Peters' first Pro Bowl selection in 2007, only Joe Thomas (10) has been selected to as many Pro Bowls as an OL
Has 2 career TDs: blocked a punt and recovered it in the end zone (12/19/04 at Cin.) and caught J.P. Losman's first career TD pass (9/11/05 vs. Hou.)
In 2014, was named a second-team AP All-Pro and garnered All-NFC honors from the Pro Football Writers of America
Was part of an Eagles offensive line in 2013 that blocked for the NFL's leading rusher, LeSean McCoy, who finished with a franchise-best 1,607 rushing yards
Also helped the Eagles set a team record with 6,676 total yards and record the second-most points in franchise history (442)