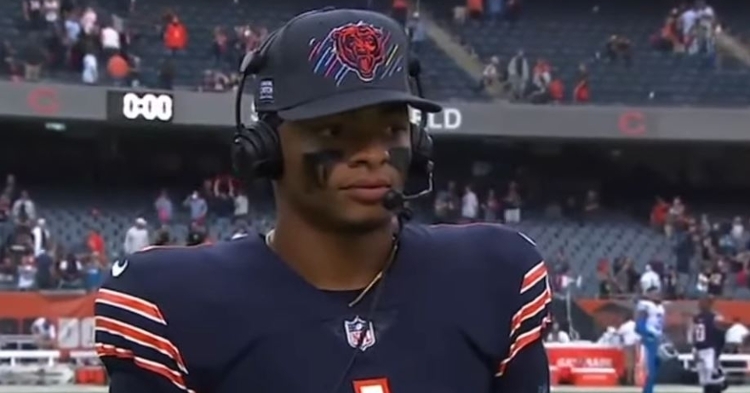 Fields was solid in his second NFL start

The Justin Fields era has begun in Chicago.

The Bears got the much-needed win against the Detroit Lions on Sunday afternoon with a balanced attack from heavy doses of running the ball with David Montgomery and some long completions from Fields as he went 11-for-17 passing for 209 yards.

After the game, the rookie quarterback spoke to FOX reporter Megan Olivi about preparing for his second career NFL start.

"Yea, throughout the week, I was just making sure I knew everything in and out from the playbook and stuff like that," Fields said. "Our main goal was to come out today and be better than last week, so I think we did that. We're not only going to continue to get better, but we're just going to keep working."

Fields was much more relaxed today against the Lions with a good week of preparation.

"I think today I was more into a rhythm, so you know as more and more reps come, you know the more rhythm I can get and more I can feel out the game and the better I'll play for sure."

For the season, Fields has passed for 347 yards with a rushing touchdown and two interceptions.

"I think today I was more in a rhythm. As more reps come, the more rhythm I can get in, the more I can feel out the game, the better I'll play." ??@justnfields joined @MeganOlivi after earning his first career win in the NFL for the @ChicagoBears! pic.twitter.com/xfzETgtnPt