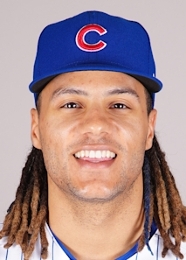 Outfielder
B I O
2017 Highlights

Collected 17 hits in 13 games with Inland Empire before being promoted on April 24…Got stronger as the season went along in Mobile hitting just .200 in April before posting a .303 line July leading to an August 3 call up to Salt Lake…Hit safely in 23 of 28 starts with the Bees, including eight multi-hit games…Added to the Angels 40-Man roster on November 20.

2016: Started season on June 3 with Burlington…Hit safely in 28 of final 32 games for the Midwest Bees…Hit .317 (91-for-287) between Burlington and Inland Empire…Earned Angels Organization Minor League Player of the Year as well as August Player of the Month.

2013: Drafted in the 28th round of the MLB Amateur Draft by the Los Angeles Angels…Made pro debut on June 25 with the AZL Angels at the AZL Athletics.

PERSONAL: Full name is Michael Hermosillo…Signed to play football collegiately at Illinois before switching focus to baseball after being drafted by the Angels…Attended Ottawa Township HS (Ottawa, IL).