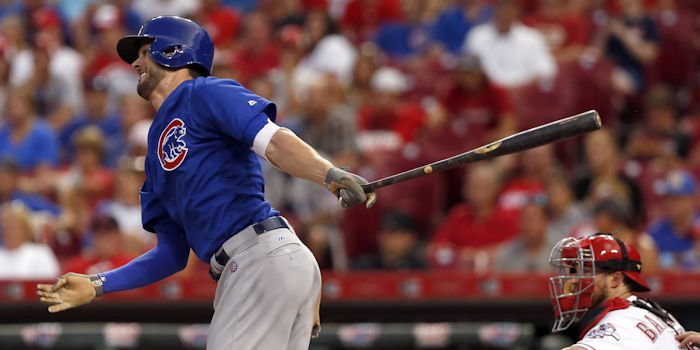 Everyone believed the night would belong to pitcher Jake Arrieta, but Kris Bryant hit three homeruns, two doubles, 6 RBIs, and claimed a MLB record to give the Cubs a win they desperately needed. Arrieta and Rizzo had home runs as well, but the man of the game was Kris Bryant who hit 1,257 feet worth of home runs, helping to land a Cubs win of 11-8.

The Chicago Cubs limped back to Cincinnati Monday night to face the Reds. The last time the Cubs were there Arrieta threw a no hitter, and hopes were high that he could get the Cubs back on track. The Cubs went into the game losing 6 of the last 7, hoping to add another win to their division lead tonight.

The game started with a bang in the first inning as Heyward broke his bat while hitting a single. Bryant followed that by hitting a liner over the first baseman to score Heyward and earned himself a double. Rizzo and Contreras both drew walks. Miguel Montero then hit a sacrifice fly to score Bryant. The score was 2-0 going into the bottom of the first, but the Reds quickly retaliated as Billy Hamilton put his speed against the Cubs stealing 2nd and 3rd after being walked. Joey Votto was also walked, and then Adam Duvall hit a double to score (and shatter the hope for another no hitter) Hamilton and Votto putting the game at 2-2.

Bryant put the Cubs back on top in the third inning hitting a home run (he hit a grand slam during Arrieta’s no hitter against the Reds). Rizzo hit to left center earning a double followed by the rookie Contreras hitting a ball right up the middle to give himself a single. Montero hit into a double play to end the inning. The Cubs gained one run though, putting them ahead 3-2. However, the Reds retaliated once again as Jay Bruce singled, scoring Zack Cozart putting the game at 3-3. Arrieta had walked 3 Reds players at this point, each of them being able to score.

The Cubs came right back in the fourth inning as Coghlan and Arrieta hit singles to get on base. Heyward then singled to center to score Coghlan, putting the Cubs up 4-3. Bryant then absolutely crushed a pitch that traveled 445 feet, hitting his second home run of the night (and putting him at 20 for the season) as the Cubs gained a 7-3 lead. The Reds then made a pitching change as Jose Diaz took the mound. The rookie Contreras gets a single off of him, but Montero hits one into the air that’s caught to end the inning. The fourth inning had Arrieta walking player number four, but the Reds were unable to score off of it.

The fifth inning showed Arrieta taking his anger out on the ball as he hit a 381 foot home run putting the Cubs up 8-3. Arrieta then gave up a two-run home run to Votto (after a lead-off walk), putting the score at 8-5. The walk was Arrieta’s fifth walk of the night.

Bryant got another hit in the sixth as he stretched a single into a double giving himself two doubles and two home runs on the night with 5 RBIs. Trevor Cahill replaced Arrieta in the inning, but Tucker Barnhart doubled to right scoring Jose Peraza making the score 8-6 with the Cubs still holding onto the lead. The Reds had two on with two out, as Travis Wood came into the game to replace Cahill. Wood gets Votto out to get the Cubs out of the jam. Pedro Strop takes over for Wood in the 7th. Duvall scored on a wild pitch by Strop, making the game 8-7 with the Cubs barely holding on.

Kris Bryant hits home run number three of the night in the eighth inning, which is followed immediately by Rizzo with a home run of his own. Bryant was 5-5 with 3 home runs, 2 doubles, 6 RBIs, and played three different positions including third, right, and left field. The Cubs had a more comfortable lead of 10-7 going into the bottom of the eighth. Bryant is the first player since 1913 ever to hit 3 home runs and 2 doubles in a game. He also claimed a Cubs record for the most total bases at 16 in a game.

The Cubs went up 11-7 in the ninth inning as Baez singled to center, scoring Albert Almora Jr. Joel Peralta made his Cubs debut at the bottom of the ninth striking out Hamilton, but gave up a home run to Votto who had two on the night. The Cubs still took the win with the score at 11-8 as Peralta gets another out in the inning before being replaced by Rondon, who is able to get the last out of the game.

The Cubs continue the series against the Reds tomorrow in Cincinnati. Jon Lester will be go up against John Lamb as the Cubs hope to claim another win.