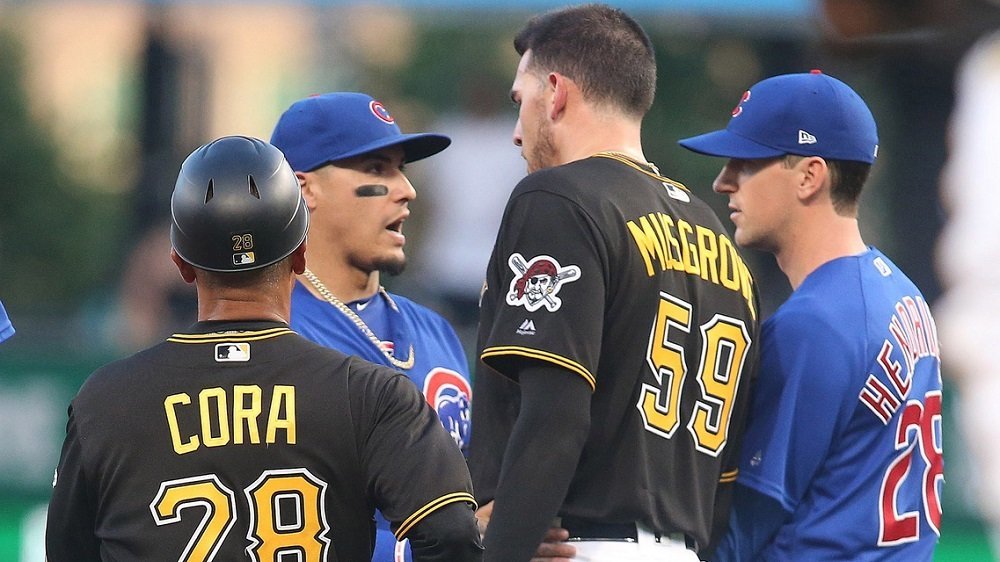 PITTSBURGH — The Chicago Cubs failed to accrue a three-game sweep of the Pittsburgh Pirates on Wednesday, as the Buccos pulled out a 2-1 win behind a solid start by hurler Joe Musgrove. Musgrove made an impact on the hill and incited drama on the basepaths, as another sliding incident overshadowed tonight's game.

The contest proved to be one of missed scoring opportunities. Both teams tallied nine hits, but the game featured a combined total of just three runs. Interestingly, all three runs were scored in the opening two innings. Cubs starter Kyle Hendricks gave up each of Pittsburgh's runs in his five-inning stint. He also allowed seven of the Bucs' nine hits and earned the loss, falling to 4-4.

Chicago provided Hendricks with run support early on but tapered off soon afterward. Albert Almora, Jr., led off with a double to deep center and scored on an ensuing single by Javier Baez. Baez is currently tied for first in the National League with 43 RBI.

The Pirates led off their offensive half of the first frame with a bang, too. Second baseman Josh Harrison began the bottom of the first with a 350-foot solo blast to right field, his second homer of the year.

Musgrove overcame the roughh first inning to to produce an otherwise solid start. He collected the winning decision to become 2-0 by throwing seven innings of one-run ball, in which was taken for seven hits and four walks. Musgrove also struck out five.

However, Musgrove's performance on Wednesday will be remembered more so for his base running than his pitching. After singling in the first at-bat of the bottom half of the third, Musgrove slid into second base rather physically on a Harrison grounder, clearly attempting to break up the double-play attempt by Baez. He succeeded in doing so but not without controversy.

Baez was knocked down as a result of the slide but was not injured. Due to the tension brewing since Anthony Rizzo's now-infamous slide in Monday's contest, both dugouts cleared in the wake of Musgrove's hard slide. No serious confrontation erupted, though, and Musgrove remained in the game. Even though the umpires in Monday's game reviewed Rizzo's slide, they were unable to review this particular play, as the league office ruled that it was not reviewable.

Oh look... ANOTHER slide controversy in Pittsburgh. And this time the benches cleared!

In the top of the ninth, the Cubs had a chance to tie the game but failed to do so. Jason Heyward led off with a single. He collected three hits for the second consecutive night after failing to produce a three-hit game for the first two months of the season. With two outs, Baez came through with an infield single that put men on first and second. Unfortunately for the Cubs, Kris Bryant grounded out to end the game.

With the 2-1 win over the Cubs (29-23) in the series finale at PNC Park, the Pirates (29-26) won for just the third time in their last 10 games. The Cubs still boast a 1.5-game edge on the Buccos. In the Pirates bullpen, Kyle Crick received credit for a hold, and Felipe Vazquez garnered a save.