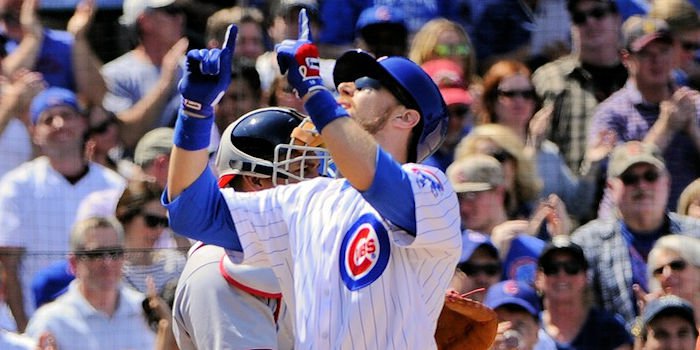 The Chicago Cubs (22-6) overpowered the Washington Nationals (19-10) 8-6 in front of 39,206 fans at Wrigley Field on Friday afternoon as the Cubs showed they are the dominant team in the National League.

The Cubs are 22-6 which is the best 28-game start to a season since the 2003 Yankees according to ESPN stats. The run differential for the Cubs is at an amazing +98 which is the highest through 28 games since 1903.

Veteran John Lackey had an impressive outing outperforming Nationals pitcher Matt Scherzer. Lackey pitched seven innings allowing only two runs, six hits, eleven strikeouts and only one walk. He has 24 starts of seven or more innings since the start of last season.

The second batter of the game third baseman Anthony Rendon took Lackey deep for a solo homer to put the Nationals up 1-0.

Infielder Tommy La Stella continued his sizzling play with a two-run bomb in the second inning to tie everything up at 2-2. It was his second homer of the season, and he entered this season with only two previous career homers.

Center fielder Dexter Fowler made an athletic leaping grab at the center-field wall to steal an extra base hit from Ryan Zimmerman to end the top of the third inning.

First baseman Anthony Rizzo smacked a towering homer that hit the flag on the right foul pole to put the Cubs up 3-2. The play was under review by the umpires for several minutes, and it was finally deemed a legal home run to the enjoyment of the home crowd. It was the 10th homer of the season for Rizzo.

"That would've left the park in a blizzard," said Pat Hughes on the radio about Rizzo's homer.

Second baseman Ben Zobrist continued his scorching hot play as hammered the next pitch for a solo homer to right field as the Cubs went up 4-2. It was the third straight game that Zobrist has homered.

He is the first Cubs player with three consecutive 3+ RBI games since Sammy Sosa in 2003.

The home crowd gave Lackey a standing ovation in the fourth inning as he recorded his 2,000 strikeout of his career with the punch out of Jayson Werth.

A strike out by superstar Bryce Harper and a David Ross pick off of Rendon at first base completed the bottom of the fifth inning.

Zobrist continued his recent exciting play with a three-run blast to make it 7-2 in the bottom of the fifth inning. The homer was his sixth career multi-homer game, and he has four homers and 11 RBIs in his last three games.

The Cubs have scored seven or more runs for the 12th time this season which is second most in the majors.

Dexter Fowler singled up the middle to score David Ross to make it 8-2 Cubs.

A heart-warming Ernie Banks tribute played on the left field video board to the delight of the crowd during the seventh-inning stretch.

Jayson Werth had a two-run double into the left field corner in the eight-inning off of reliever Justin Grimm to make it 8-4. Nationals continued the huge inning with a two-run homer by Wilson Ramos to make it 8-6.

Cubs closer Hector Rondon pitched a perfect ninth inning for his fifth save in five opportunities. The Cubs now have a seven game lead on the second place Pittsburgh Pirates in the National League Central.