CHICAGO -- With baseball’s offseason already under way, who could the Cubs grab to bolster their roster? As the best team in the game, they could not spend the entire offseason and still be World Series favorites. With so much young talent, the Cubs can also trade for a big time player. Dexter Fowler, Aroldis Chapman, and Jason Hammel are the three biggest names leaving the team, plus other relief pitchers, so the Cubs biggest needs are at center field, a starting pitcher, and some relief pitchers.

The problem is that this year’s free agency class is pretty weak. Whereas last year there were multiple deals for more than $150 million, it is possible that the highest deal will be around $115 million. There are no starting pitchers like a Zack Greinke or David Price that the Cubs could get. There are some outfielders, but not many center fielders, and very few leadoff hitters. Considering the fact that the Cubs already have plenty of outfielders, I have left them out of my analysis. Relief pitchers are an interesting case this year. 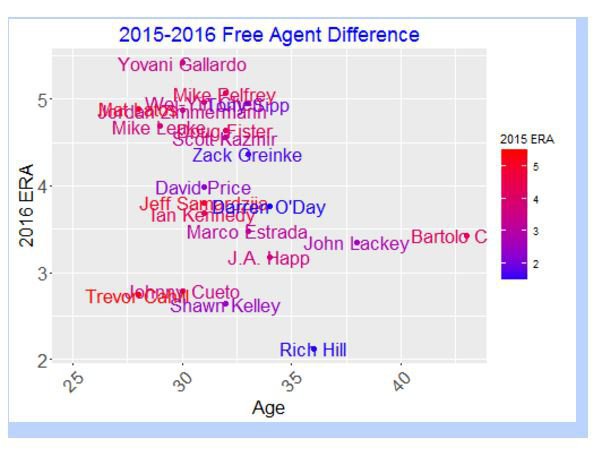 This graph shows some of the differences between players that did well in 2015 that continued to do well in 2016, versus those that did not. Cubs pitcher Trevor Cahill, for example, did better in 2016 than he did in 2015, and performed well under his contract. Zack Greinke and David Price, on the other hand, did not do as well in 2016. This can be dangerous when signing such large contracts. If these pitchers were free agents now, the best pitchers to go after would be Johnny Cueto, Trevor Cahill, Shawn Kelley, and Rich Hill (despite age). J.A. Happ would also be a good person to look at (and it worked for Toronto – he placed 6th in the Cy Young voting).

But this 2016 class is much different. Take a look at a similar graph: 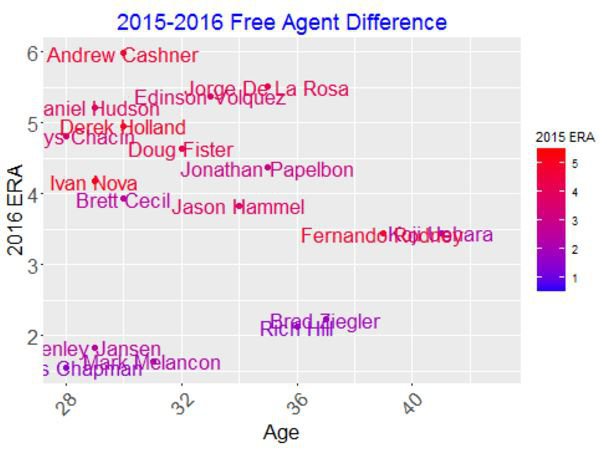 Unlike last year’s free agency, three pitchers stand out: Aroldis Chapman, Kenley Jansen, and Mark Melancon. This is no surprise, as they have been the hype among this class.

But here is an important thing to notice: there is a large gap of pitchers besides those three. Rich Hill is back on the graph as he signed a one-year deal. If a team is willing to take a risk on his age, then he could be a take for a 4th or 5th starter. Besides him, the best starter to look at could seriously be Jason Hammel!

If the Cubs are willing to shop, their best bets are to get one of the three big relief pitchers. Judging on last year’s free agent class, these three are significant outliers that there is a high chance of them doing well no matter how much a team pays. Mark Melancon could be the best deal – he posts similar numbers as Chapman and Jansen and will be cheaper.

If the Cubs lose out on one of these three, then perhaps grabbing an older player like submarine pitcher Brad Ziegler or (really old) Koji Uehara. As for starting pitching, they might be better off by moving Mike Montgomery to fill their 5th spot than to risk spending on a free agent. Whatever the Cubs go for this offseason, their best bet is to look at relief pitchers.