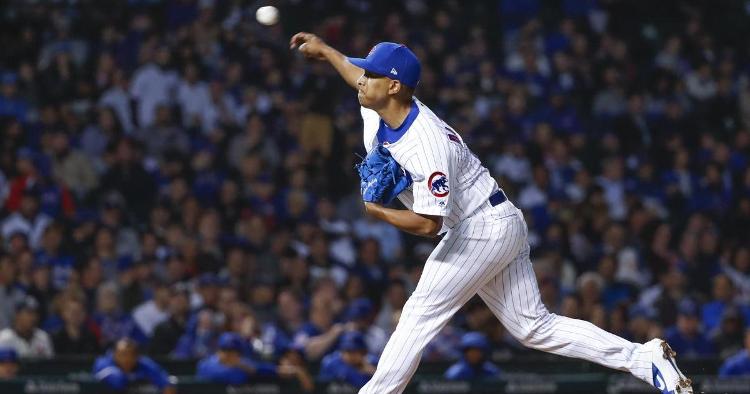 CHICAGO — Making his highly anticipated big-league debut, top Chicago Cubs (41-33) pitching prospect Adbert Alzolay performed like a seasoned veteran on the mound in four innings of work on Thursday. With the Cubs battling the New York Mets (35-40) at Wrigley Field in the opener of a 4-game series, Alzolay tossed four innings of 1-run ball out of the bullpen and earned the winning decision for his efforts. Ultimately, a 6-run third inning won the game for the Cubs, who overcame a 3-0 deficit and topped the Mets 7-4.

Tyler Chatwood started on the bump for the Cubs, with the starter-turned-reliever making a spot start in place of the injured Kyle Hendricks. Chatwood gave up three runs in four innings pitched but forced three double plays that minimized the damage that the Mets could have done at the plate in the early goings. The first run of the game came on one of the double plays, with a bases-loaded groundout ushering home the lead runner for the Mets in the top of the second. Pete Alonso proceeded to put the Mets up 3-0 with a 2-run home run off Chatwood in the next inning, but, in the bottom half of the third, the Cubs took complete control of the game.

They threw the ball back and he hit that for a home run, too.

The bottom of the third began with a leadoff single by Carlos Gonzalez, who then advanced to second on a sacrifice bunt by Chatwood. Daniel Descalso next smacked a single up the middle that scored Gonzalez and put the Cubs on the scoreboard. Mets pitcher Walker Beckett, who made his first start with the Mets on the night, came unglued after that, with the young hurler walking a batter and giving up three hits in a row before being removed from the contest. Kris Bryant hit a bloop single near the right-field line that drove Descalso home. Thereafter, Anthony Rizzo lined a 2-run double into the right-field corner and was scored soon afterward on a Javier Baez triple. Using a typical unorthodox slide to secure the 3-bagger, Baez hustled to third base after skying a hit to deep center field, thereby chasing Beckett from the game.

Leading 6-3 at that point, Chicago had momentum completely on its side. Chatwood pitched the top of the fourth and batted in the bottom of the fourth, with the right-hander drawing a leadoff walk and then inciting a balk with a feigned steal attempt. However, Alzolay relieved Chatwood at the start of the fifth and wasted no time in settling into a groove. Alzolay recorded his first career strikeout to end the top of the fifth and went on to strike out the side in the top of the sixth. Alzolay pitched four hitless innings before giving up a home run to Todd Frazier to lead off the ninth. Steve Cishek, who accrued the save, replaced Alzolay on the hill not long after that, and Alzolay, who fanned five while giving up just one hit and two walks, received a standing ovation from the fans while walking off the field.

Cubs pitcher Chatwood draws a walk, then pretends to steal and gets Font to balk. Brodie you watching? #EverybodyIn #LGM pic.twitter.com/YzwnUZNqw1

Meanwhile, Baez, who went 2-for-4 at the dish, collected his 99th career homer with a solo blast to left-center in the bottom of the seventh. The 404-foot dinger marked Baez's 18th long ball of the season and put the Cubs ahead by a score of 7-3. Cishek entered with no outs, a man on first base and the Cubs leading 7-4 in the top of the ninth, and he tallied an out in three consecutive at-bats to lock up the Cubs' 3-run victory and secure Alzolay's first career win.